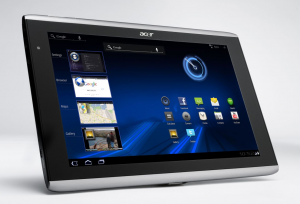 If you’re waiting for the Asus Eee Pad Transformer, which not only comes with a unique keyboard dock to ‘transform’ the Transformer into an Android laptop, but is one of the more affordable Android 3.0 Honeycomb tablets on the market, then OfficeMax is hoping to lure you away with the competing Acer Iconia Tab A500. Both the Iconia Tab A500 and the Eee Pad Transformer offer Android 3.0 Honeycomb powered by a dual-core NVIDIA Tegra 2 applications processor, and both devices are more modestly priced among the crop of Android tablets available today. The Iconia Tab A500 will retail for $450 and can be found in over 900 OfficeMax retail locations.

The 10.1-inch Android tablet weighs 1.69 pounds, making it heavier than the iPad and iPad 2 from Apple. Additionally, the Iconia Tab A500’s pricing is for a WiFi-only model. The tablet has been available for Best Buy and now OfficeMax will also be joining the tablet frenzy.

At CES, Acer had also announced a version of the Iconia Tab A500 with 4G LTE support for Verizon Wireless.