Walmart Sells iPhone 5 for $129, But Still Not Best Deal

Walmart slashed the price of the 16GB iPhone 5 to just $129, so long as it’s purchased at retail and along with a two-year contract from AT&T, Sprint or Verizon. Unlike some iPhone 5 deals, this new lower price appears to be a permanent price reduction, so there’s no need to rush into a Walmart store today.

Apple and its wireless partners typically sell the 16GB iPhone 5 for $199 to those who agree to two-year contracts. Most wireless resellers are in the midst of slashing iPhone 5 prices in anticipation of Apple releasing a new iPhone this fall.

Walmart’s $129 iPhone 5 deal is available starting today and is only available at its retail stores. For the time being, Walmart is continuing to sell the  Straight Talk compatible 16GB iPhone 5 for $549. Straight Talk is an affordable pre-paid wireless service for those who do not want to sign up for long-term contracts or who may not be able to qualify for a post-paid contract from AT&T, Sprint or Verizon. 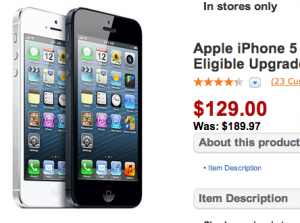 Before rushing off to buy the $129 iPhone 5 from Walmart, shoppers should consider other options. Target is offering the 16GB iPhone 5 for $149 and will drop the price to $0 for those willing to trade in an iPhone 4 or 4S. Best Buy is running promotion almost the same as Target’s. This means that almost no matter which big-box retailer you go to this weekend you’ll be able to get a decent deal on the iPhone 5.

But those who want the best iPhone 5 deal, it’s worth ordering directly from AT&T. The wireless carrier is currently offering 50% off all smartphones, including new and refurbished  iPhone 5 models. That means shoppers can score the 16GB iPhone 5 for just $100, the 32GB model for $150 and the 64GB model for $200 with a two-year contract.  AT&T is also waiving activation fees as part of the promo.

Read: iPhone 5 – True Cost is Thousands, Most Expensive iPhone Yet

Before you go too excited about these iPhone 5 deals, just realize that these discounts are a pittance compared to the iPhone 5’s total cost of ownership. It’s worth noting that iPhone 5 shoppers in many states must pay tax on the entire retail price, regardless of discounts such as these. In states like California, that can mean $55 in taxes on the 16GB iPhone 5, even if it is ‘free’ after trading in an old phone.

We strongly recommend buying the iPhone 5 over the iPhone 4S, which is cheaper than iPhone 5. However, people who want the latest and greatest technology may be better off waiting to buy a new iPhone until this fall. Apple will release iOS 7 within the next three months or so and will almost certainly release a new iPhone alongside it. Most industry insiders are expecting the next iPhone to be called the iPhone 5S and to look almost exactly the same as the iPhone 5, but be packed with several internal upgrades such as a better camera and faster processor.

Read: The iPhone 5S Will Look Like the iPhone 5 (Video)