Looking for a last minute gift for your sweetheart for Valentine’s Day? Well, if you’re beloved is a geek, a techie, or an avid reader, the Amazon Kindle Fire 7-inch slate may be just the perfect gift for the day of love, and the good news is that Walmart is offering a promotion on the Android-powered slate.

While Walmart’s price of $199 is on par with Amazon’s price for the tablet, the good news is that you can get the Kindle Fire through Walmart and also get a $50 gift card on top of that to spend on other things. While the offer isn’t as good as a flat out $50 discount, you can use the gift card towards other purchases at the discount retail chain. The deal ends on February 14. 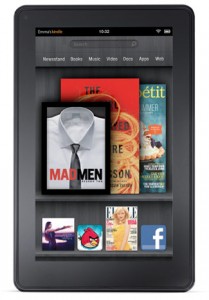 The 7-inch Amazon Kindle Fire comes with a dual-core processor, an elegant design, Android 2.3 Gingerbread, and Amazon’s proprietary UI. The tablet taps into Amazon’s cloud services and digital stores, including those for ebooks, digital magazines, movies and TV shows, apps, and MP3s. The tablet has been a huge hit since debut as it undercuts a lot of competitive offerings on the market today and still delivers in performance.

The Kindle Fire represents Amazon’s first foray into the tablet space. It is rumored that Amazon will offer multiple Kindle tablet models on the market with varying screen sizes. Though the Kindle Fire was rumored to debut alongside an e-reader-centric tablet with a larger screen, that did not materialize and the Kindle Fire currently represents Amazon’s only entry in the tablet space. A larger tablet with an inexpensive price tag may help Amazon compete better against Apple’s market-leading iPad tablet.