World Cup apps that let you watch USA vs Ghana live on your iPhone, iPad and Android are moving up the charts, bringing other soccer apps along for the ride.

The USA vs Ghana World Cup 2014 match takes place at 6PM Eastern tonight and as fans prepare to watch the United States Men’s National Soccer Team live, World Cup apps are exploding in popularity and the match is trending on Facebook and Twitter.

There are many ways to watch the USA vs Ghana World Cup 2014 challenge, and fans are downloading these apps to Watch the World Cup live, even without a cable subscription.If you are watching on TV, the match will show on ESPN, with pre-game coverage starting at 5:30 Eastern.

Three of the top 5 apps in the iPhone and iPad app store are designed to let users watch the United States Men’s National Soccer Team take on Ghana in the first outing for USA in the World Cup 2014 tournament.

The FIFA Official App is the top app in the iPhone and iPad app store and is featured in the Google Play Store for Android. This is a great World Cup App to follow the matches with updates on the score and information about the teams but it will not let you watch the match live.

WatchESPN sits in the number 5 spot this morning, as viewers scramble to download the free World Cup app that allows many cable subscribers to watch USA vs Ghana live on iPhone and iPad or Android. This app requires a cable subscription with an ESPN partner and from that allows users to watch from anywhere they have an Internet connection. 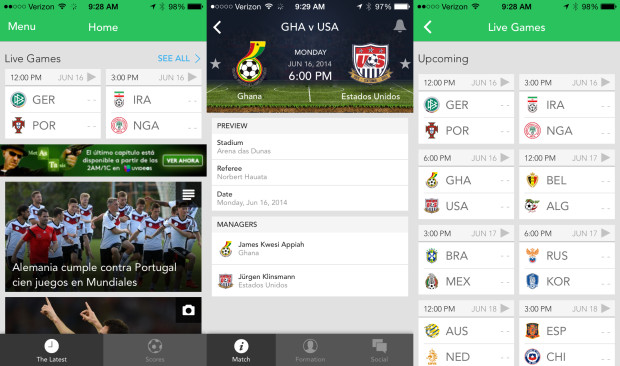 As fans prepare to watch the USA vs Ghana match live, World Cup apps take over the top charts and games trend on Twitter and Facebook.

If you can’t use WatchESPN to view the World Cup live, you can download Univision Deportes for free. This app offers Spanish coverage of the World Cup, including live World Cup 2014 streaming video of most matches. This includes the USA vs Ghana match that will air on the app for iPhone, iPad and Android.

This is the easiest way to watch the 2014 World Cup live, and to see the USA vs Ghana match from your iPhone, iPad or Android device. If you want coverage in English you can use this trick to watch an English stream of USA vs Ghana live from the UK.

In the iPhone and iPad App Store games like FIFA 14 and Soccer Stars are near the top of the charts, thanks to free ways to play with the World Cup teams.

The iPad, iPhone and Android FIFA 14 apps are all free, and console gamers can enjoy the fun too with a free FIFA 14 update on Xbox One, PS4, PS3, Xbox 360 and PC. This update adds the ability to play World Cup challenges to work through highlights from the games and to play Friendlies against a friend.

The World Cup 2014 tournament started on June 12th and runs through July 13th. These early matches are a round robin tournament where each team plays multiple opponents to earn a spot in the finals that start at the end of June. On Twitter #USAvGHA, USA vs Ghana and #BeatGhana are trending and the United States Men’s National Soccer Team is trending on Facebook.

Team USA plays Ghana today, Portugal on June 22nd and Germany on June 26th. Their performance will dictate any entry into the finals.