If you’re in China, Samsung is hoping that you’ll warm up to the flip form factor which has dominated feature phone designs of yore including the original Motorola RAZR (MOTO RAZR). The company has recently released the Samsung W999, an Android-powered clamshell for the Chinese market with dual displays, a large dial pad, and a hinge that will make the powerful smartphone compact enough to fit in your pocket when closed. 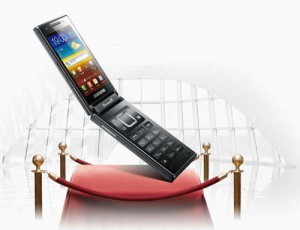 While large touchscreens have become en vogue in recent years following Apple’s iPhone release, the clamshell form factor still attracts a cult following. HTC’s Windows Mobile-powered Startrek of yesteryear was a favorite among fans and more recently, Research in Motion had revived the form factor with the BlackBerry OS on the BlackBerry Style, a smartphone that’s been adopted for Sprint’s Now Network in the U.S.

Today, with the popularity of Android and Samsung’s desire to fill every niche, the South Korean manufacturer has created a spectrum of smartphones and tablets to meet every user’s needs. The Samsung W999 is the company’s first Android flip phone and will surely delight those who favor this style.

The device features two OLED touchscreens with an 800 X 480 WVGA resolution on a 3.5-inch panel. Internally, a dual-core 1.2 GHz CPU, Android 2.3 Gingerbread, Android shortcut keys alongside a directional pad round out the specs.

While the form factor may not be a proven one for markets like the U.S. where slate-styled devices dominate, at least it won’t be accused of infringing on Apple’s design patents. Is the W999 something you’d want to see here in the U.S.?