What Happens When Motorola Droid and RunKeeper Play Hockey 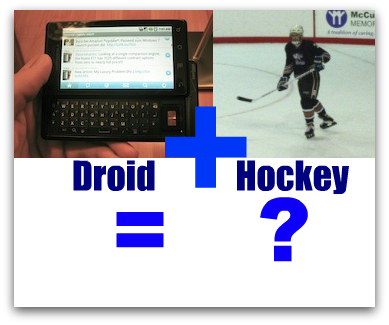 You’ve likely seen numerous posts on Twitter and Facebook of runners proudly sharing the detailed statistics of their distance workouts. Seeing this information shared over and over prompted me to perform an experiment. What happens when you use RunKeeper while playing ice hockey?

I decided to put my Motorola Droid smartphone to the test by strapping it to myself while playing a game of pick-up hockey. An avid intramural hockey player for 16 years, I thought it would be interesting to see what happens when my smartphone’s GPS and a tracking app is used to record the events of a hockey game. I was picturing results that would show top speeds around 30 MPH. I was looking forward to viewing a map with detailed information including where those speeds were achieved while on the ice. 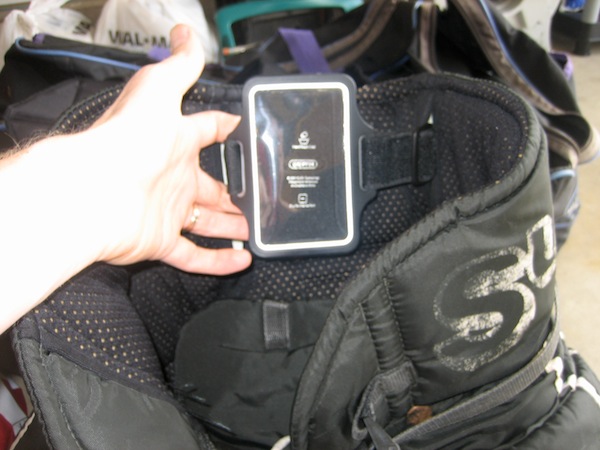 The biggest hurdle in this experiment was determining where to safely place the Motorola Droid so that it would not be damaged during gameplay and still be able to successfully communicate via GPS. After examining all of my hockey equipment, the best place I could find was the back of my hockey pants. I used a Griffin armband that that was originally designed to work with an iPod to securely hold the Droid. The strap of the armband allowed me to wrap it around the padding of the spine protector and place the Droid in an area where would it would be free from collisions and wet ice.

I’ve used RunKeeper several times to track my distance workouts. Running, walking, and a quick session on the elliptical were always detailed with excellent precision. I like RunKeeper because it is easy to use, supports many different activities, and allows for workouts to be easily shared online.

When using RunKeeper once before, I tried to see how precise it was by running the word “hello” in a culdesac. I thought it would be cool to see hello on the map of my run, but unfortunately GPS was not that accurate. It didn’t look much different than a typical run except for a few jagged lines where I had ventured off of the sidewalk. It simply couldn’t pick up the fine detail. 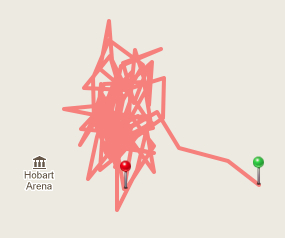 So what were the results from hockey?  Much like the run where I tried to write hello, GPS was not very accurate at recording information. As the map displays, there are no smooth curves where I turned when skating; there are only sharp redirections and straight lines. Another discrepancy in GPS recording is the speed at which I’m traveling. I’m certain that I skate much faster than I have the ability to run. On a previous run this month, I topped out at 8.9 MPH and averaged 6.41 MPH over a 2.92 miles. RunKeeper reports that my top speed during the hockey game was a slower than running 2.2 MPH. Average speed is also lower than expected since overall speeds were not correctly tracked. Another point that shows a discrepancy with skating speed is highlighted by detailing that my walk from the locker room to the ice is actually faster than my skating during the game.

The errors of GPS reporting likely aren’t due to any limitation of RunKeeper. I still enjoy and will continue to use RunKeeper for my distance workouts. It’s a great app with many options, and it’s super easy to use. I’m also impressed that my Motorola Droid was able to stand up to a little pain. There were a few times I hit the boards and subjected my Droid to unwarranted circumstances. I lost an edge and fell on my back while skating down the ice on a breakaway towards the end of the 2nd period. The impact of falling on top of my Droid and the water that was collected on my jersey weren’t enough to cause any damage.

I’m disappointed with the results, but I do plan on conducting this and similar GPS experiments in the future. Next time I’ll try Google’s MyTracks app to see if there if there is any change in recording. Looks like GPS is great for the intended purpose, but it doesn’t have enough precision to properly report the details of some sports.

Anyone else have any experience using GPS, RunKeeper, or another app to record distance workouts?  Hit up the comments to share your results.

Check out all of the statistics by visiting RunKeeper.

Update:
RunKeeper had the following comment by way of twitter, “in general gps is more conducive to longer straighter tracking than lots of fits and starts like hockey.”

I replied, “Indeed. Was curious to see what happened. Still a big fan.”