Which iPhone Should I Buy?

Many readers we talk to already know if they want to buy an iPhone or an Android smartphone, but once the initial decision is made there is still a lot to consider.

While eavesdropping in a conversation about which iPhone to get, it was hard not to butt in and share which iPhone the person should buy, so instead this article will help this family and will help you pick the right iPhone to buy.

While many iPhone buying advice articles focus on which iPhone you should buy right after the new iPhone is released, several months later the equation starts to change thanks to a variety of deals and the temptation to wait for a new iPhone 6 in 2014.

Should I buy the iPhone 5s, iPhone 5c or iPhone 4s? — That is the popular question.

Not all iPhones are created equal, and the free iPhone may not be the best iPhone for every user, even if they want to save the cash. Buying an iPhone is a two-year commitment for most shoppers and so buying a phone today is an investment in your mobile communication and productivity for the next two years. The total cost of owning an iPhone for this time only varies by $100 to $200 depending on which iPhone you buy. Over two years that’s $5 to $10 a month.

Come along as we compare the iPhone 5s, iPhone 5c and iPhone 4s. If you are shopping for an iPhone 5 used, you can compare most of the same features to the iPhone 5c, though the design is not similar.

Apple sells three iPhone models right now in a variety of colors, storage sizes and carrier options. The iPhone is available on the biggest carriers as well as on pre-paid or no contract carriers like Straight Talk offering a variety of up front prices and monthly costs.

All of the iPhones on sale at Apple and carriers run iOS 7 and are due for an iOS 7.1 update in the coming months with fixes and features. Read on as we compare important features of the three iPhones Apple sells to help you buy the right iPhone.

All of the current iPhone models are equipped with a Retina Display, but the iPhone 5s and iPhone 5c come with a larger 4-inch display compared to the 3.5-inch display of the iPhone 4s.

The larger display features a slightly higher resolution to match the bigger screen. With a larger screen users see a little more of apps, photos and text on the screen at once. Movies also fill up the display thanks to the 16:9 aspect ratio which better matches movies. 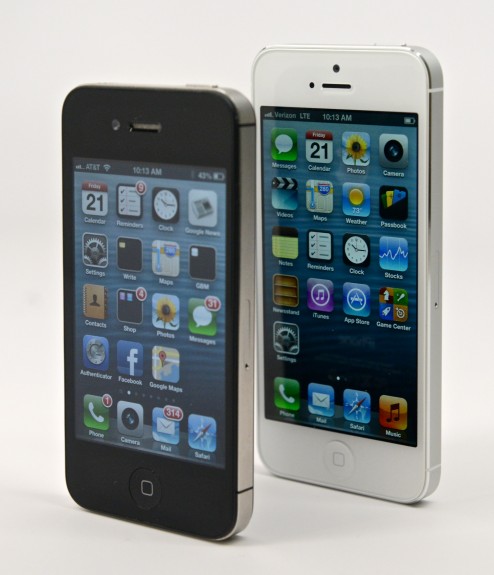 The iPhone 5s and iPhone 5c offer a larger display.

The larger screen of the iPhone 5s and iPhone 5c doesn’t make it difficult to use with one hand, like some super-large smartphones, and the thinner design of these phones actually helps one-handed operation. The benefit of a larger screen is clear, which makes the iPhone 5c a more attractive option than the iPhone 4s especially considering some stores sell the iPhone 5c for as little as $40 to $50.

The iPhone 4s does not support LTE, which means owners are not able to connect to the higher speed networks across the U.S. LTE is a newer form of cellular connectivity which offers speeds faster than many home networks and up to 10 times faster than the 3G connections on older iPhones.

For the average user this may not seem like a big deal, as many ask why they need the faster speeds, and if the speed is worth buying an iPhone 5c or iPhone 5s instead.

While the benefits to power users like using the iPhone as a faster personal hotspot, there are still benefits for average users. LTE brings faster app downloads, faster web browsing and other areas of daily use.

Verizon’s 4G LTE network is complete, AT&T is ever-expanding and both T-Mobile and Sprint are working to catch up. If you are buying an iPhone today, it is worth getting LTE, even if your location does not currently include 4G LTE coverage on your carrier.

The iPhone 5s is the top of the line smartphone that Apple sells. Users can choose from three phones, each with a different processor and capabilities that come from the additional power. Some of these new features are found in the camera selection below.

Overall the iPhone 4s, iPhone 5c and iPhone 5s run iOS 7 in a similar fashion, but the iPhone 4s feels slow for switching apps, opening apps and in general use when coming from an iPhone 5s or iPhone 5c. One common misconception is that the speeds are only noticeable for gaming or for power users, but there are speed differences that the average user will see when using the devices side by side.

The video above includes a speed comparison of the iPhone 5s, iPhone 5c and iPhone 4s, which illustrated common areas where speed matters.

The iPhone 5s also includes a new Motion Coprocessor which tracks motion which it can pass to apps to track fitness and other movement.

One of the biggest difference is camera performance and camera features, and as many users will turn to the iPhone as their primary camera, the iPhone’s camera becomes more important.

The iPhone 5s comes with burst mode which can take up to 10 photos per second and can identify which of them are best. This is perfect for taking photo of action at sports events and for taking photos of a kid or a pet that moves to fast to perfectly time a shot. 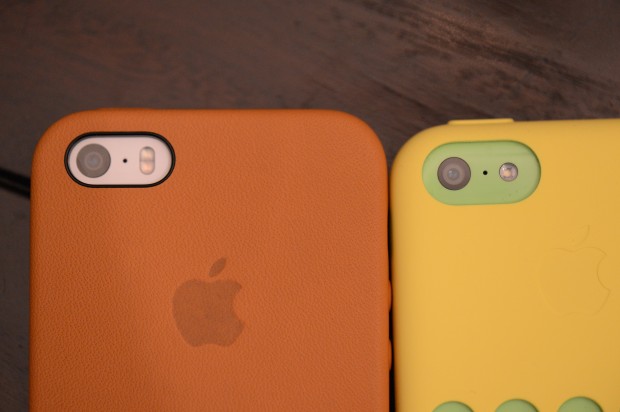 The iPhone 5s camera is better than competing iPhones.

iPhone 5s owners can also take slow motion videos like the one below. The iPhone 5s captures video at high frame rates allowing users to slow down action for dramatic and humorous effect.

The iPhone 5c and iPhone 4s can take multiple photos with one push of the shutter but it is not as fast as the iPhone 5s burst mode. They do not support slow motion video with the built in camera.

When it comes to the iPhone software and support, the newer iPhones come with an edge. The iPhone 4s will likely drop off the support list when Apple announces a new version of iOS next year. Apple routinely drops older devices from getting new software in order to prevent performance slowdowns and allow innovation for newer devices.

The iPhone 5s and iPhone 5c will see more iOS updates, likely three to four years of major updates which will bring some trickle down features from the iPhone 6 and other new iPhones.

Apple supports iPhones for a very long time, so don’t worry that the iPhone 4s will be treated as a second class citizen if you need to go to an Apple Store or call in for help, but in the same area it will not get the latest software for very long.

Which iPhone Should I Buy? iPhone 5s, iPhone 5c or iPhone 4s

As we approach the end of 2013 there are many users looking to buy a new iPhone, and the iPhone 5s remains the top choice for users who want the best Apple has to offer. The iPhone 5c is a mid-range iPhone with many of the same features as the iPhone 5 and a new plastic body. The iPhone 4s is cheap, but in all honesty not the best iPhone for many users. 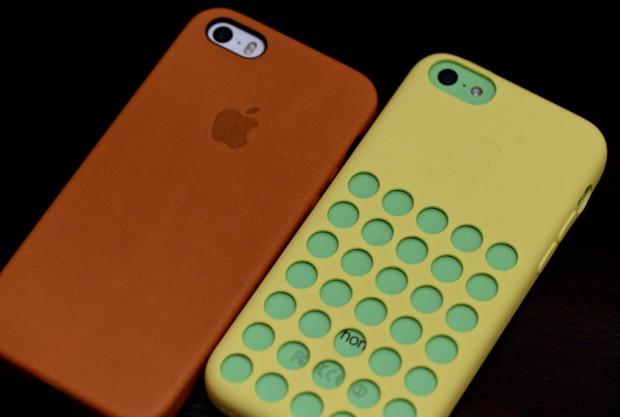 Picking the right iPhone is easy with a little help.

When it comes to buying an iPhone it is worth keeping in mind that there is a new iPhone coming in 2014, but analysts and leaks can’t agree on the when it will arrive. Waiting for the iPhone 6 is an option, but for most users it is still too far away to delay buying a new iPhone unless you want a specific rumored feature like a larger screen.

We see the iPhone 5s, Apple’s top of the line iPhone drop to $99 on a two-year contract from time to time with sales and trade in offers. You cannot get this deal on a daily basis, but if you are willing to compare prices at Best Buy, Target, Radio Shack and others you can find a deal. These are the best deals for AT&T and Verizon customers. 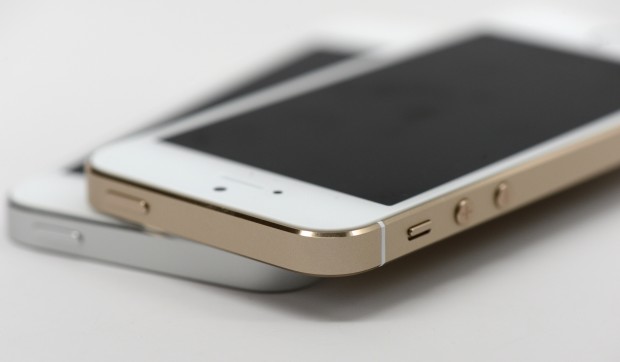 This is why you should buy the iPhone 5s.

For Sprint shoppers, the iPhone 5s is as cheap as $99 for users who switch from another carrier. Unfortunately existing Sprint customers are left out in the cold. T-Mobile is offering a $0 down option for the iPhone 5s, but this doesn’t drop the price in the long run.

The iPhone 5s is the best choice for users who want the premium iPhone experience with all the features and the largest likelihood for big updates and new features in 2014 without the need to buy a new iPhone.

The iPhone 5c is as low as $50 at Target and we see similar deals from time to time at Walmart. This is $50 less than buying from a carrier and will allow users to get a good iPhone experience without all of the extras that the iPhone 5s bring to the table. 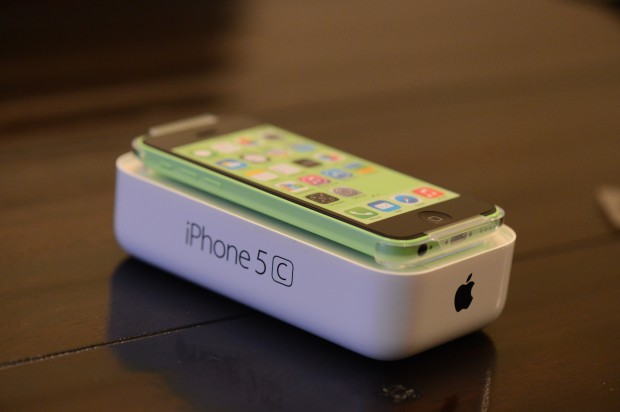 The iPhone 5c is also a good option if you need to save cash.

At $50 more than the iPhone 4s, it offers a better camera, longer support for major software updates, better day-to-day performance as well as a larger screen and 4G LTE support.

Sprint shoppers can get this free if they switch from a competing carrier and T-Mobile offers a $0 down option but in the end you will still pay full price.

The iPhone 4s is free on every carrier except T-Mobile which no longer subsidizes smartphones. A free iPhone is incredibly tempting for shoppers, and it was the main reason the family I overheard was looking at getting an iPhone. 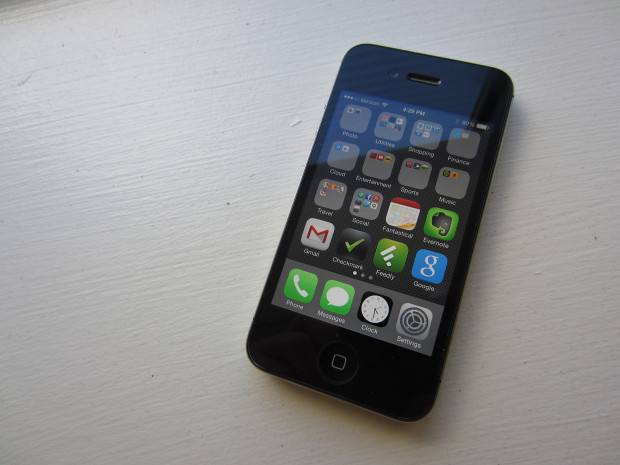 The iPhone 4s is worth skipping over for most shoppers.

The younger daughter in this conversation tried to convince her mother and grandmother to get the iPhone 4s. For these users who simply want to FaceTime and iMessage with family members, it may be enough, but many users will be better off looking at the iPhone deals to find an iPhone 5s or iPhone 5s.