For those of you that aren’t thrilled with the potential of the Samsung Galaxy S II, HTC Vigor or Motorola Droid Bionic or for those that have an affinity for white colored smartphones, you’ll be happy to know that a white version of the Droid Incredible 2 will soon be gracing the shelves at Best Buy.

We enjoyed our time we spent with the Droid Incredible 2 so it’s definitely a phone to consider if you can do without 4G LTE or the latest and greatest hardware and from the looks of things, it appears to be a pretty good looking piece of hardware.

The device will apparently have an in-stock date of August 21st which means we should see it launch soon. While that August 21st date would be a nice launch date, it’ll likely come later. 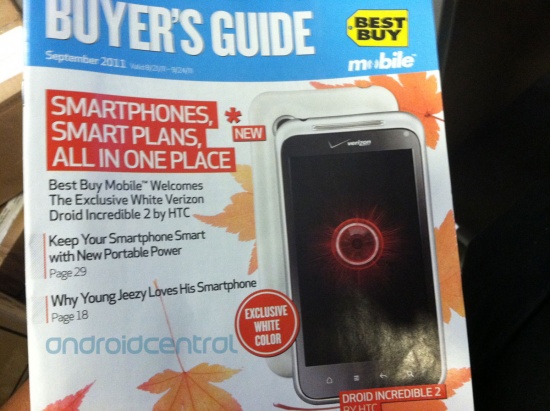 As for pricing, it’s apparently going to come in at $149 on a new two-year contract which is actually pretty affordable. It pleases me that Best Buy isn’t going to charge more money for a gimmick.

Still, this is going to be a hard sell with all of the new phones on the horizon. Let’s just hope it doesn’t end up with the same fate as the HP TouchPad.