Back in the early part of January, we showed you a white Samsung Galaxy Nexus that was apparently, at least according to retailers, going to be headed across the pond to the United Kingdom. Today, that device is official and it’s going to be hitting shelves next week on February 13th. And it probably won’t be just Clove UK and MobileFun who carry it either.

Samsung says that it’s going to be coming to a wide-range of stores across the United Kingdom when it arrives on Monday so if you’re interested, you should have plenty of options in both the physical and virtual sense.

As for those of you living in the United States, there are currently no plans, at least official ones, to launch the white version of the phone. That of course could change in a heartbeat but as of right now, you’re going to have to import one and use it on AT&T or T-Mobile.

The white Samsung Galaxy Nexus is the same exact phone as the Galaxy Nexus that launched in December of last year. Only this one has a nearly all-white design save for the bezel up front which remains black as night. 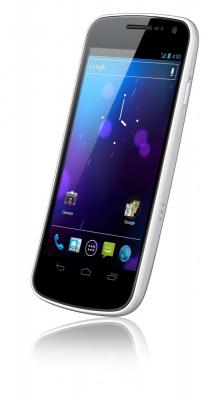 Everything else is the same.

4.65’’ HD Super AMOLED display which boasts 720p resolution. That’s 1280×720 for those keeping score. It will have the same mediocre 5MP camera up in the front. It’ll have a 1.2GHz dual core processor and HSPA+ 4G connectivity.

And of course, it’ll have Google’s Android 4.0 Ice Cream Sandwich operating system right out of the box. If you’re not familiar with Android 4.0 and all it has to offer, you’ll want to check out this guide.

We reviewed the Verizon Galaxy Nexus, which is a different model than the one we’re talking about here, but feel free to read the review as it might give you some insight into what to expect from one of the best Android phones in existence.

And hey, who knows, maybe you’ll feel inclined to pick one up as an early Valentine’s Day present.