After months and months of rumor, speculation and leaks, the white Nexus 4 has finally been announced and will be heading to shelves starting tomorrow. The device likely has the attention of many consumers, not only due to its new color but also due to its specifications. Those thinking about buying it though have some things that they need to know.

Last November, Google and LG took the curtain down from around their Nexus 4, a device that replaced the Samsung Galaxy Nexus and followed in the footsteps of the Nexus One and the Nexus S. Even without access to LTE data speeds, the Nexus 4 quickly became a hit with the device selling out in the Google Play Store and remaining sold out until February.

It came as no surprise that the Nexus 4 was a popular device. It had the software which included vanilla Android 4.2 Jelly Bean, quick updates and an unlocked bootloader. It had the hardware which included a 4.7-inch HD display, quad-core processor, solid 8MP camera, and unique design. And it had the price, starting at $299 unlocked.

In the months since its arrival, the Nexus 4 has remained one of the top options on the market, even after the arrivals of the new HTC One and the Samsung Galaxy S4.

Today though, LG has announced a new Nexus 4, a new white Nexus 4 that will be coming to shelves starting tomorrow and one that will certainly be enticing to those that have waited for it.

The white Nexus 4 had been rumored for many months with leaked photos and even video making their way to the surface, pointing to a possible launch down the road.

Finally, after all of that time, the white Nexus 4 has emerged, officially, and will soon be on shelves for consumers to buy. The device, while not as timely as many had hoped, will still attract quite a few eyes. And for those that might be tempted, here are the five most important things to know about the new white Nexus 4.

No U.S. Release Date, Yet

The company did say that regions like North America and Europe, select markets it seems, will see the white Nexus 4 go on sale at a later date. Beyond that, there is nothing.

So what this means is that the United States release is up in the air though given its size, we expect it will be one of the select markets in North America that gets it. Just when though remains a mystery.

Remember, we heard that the white Nexus 4 would be arriving with Android 4.3 Jelly Bean on June 10th, in a likely attempt to steal thunder from WWDC, so it could be that that is the day it goes on sale in the U.S.

Google Play Store Isn’t a Given

Those looking to buy it from the Google Play Store aren’t necessarily guaranteed to be given the chance to. It was LG that made the white Nexus 4 announcement and it did not specifically state that the smartphone would be going on sale in the Google Play Store when it arrives in the various regions that it will be arriving in. 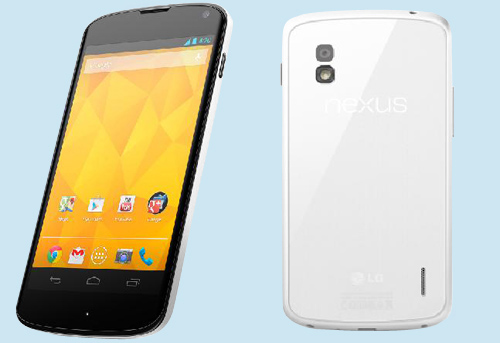 LG hasn’t said whether or not the device will land on Google Play.

Despite the lack of an announcement pertaining to Google Play, we still expect it to wind up in the Google Play Store, at least in some regions. It would be extremely odd for Google not to sell the white version of its big name Nexus smartphone so we don’t anticipate consumers having to buy it directly from LG. Stranger things have happened though.

That said, at this point, there are two other big unknowns. The first, the storage options. The white Nexus 4 did have storage attached to it in the announcements which could be a sign that it’s coming in 8GB and 16GB form like the black Nexus 4. Rumors have been swirling about a 32GB model though there is nothing that indicates that that will be an option.

Pricing is also unknown. LG didn’t say anything about how much it would cost though we imagine that if it makes it to the Google Play Store, it will cost the same as the black models. That means $299 and $350 for 8GB and 16GB, unlocked. 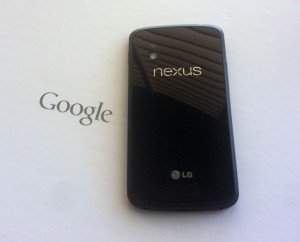 The white Nexus 4 will be the same as the black Nexus 4.

Indeed, the Nexus 4 will be coming in a new color but that won’t mean that the internals will change. The white Nexus 4 will keep the same hardware as the black Nexus 4 which means a 4.7-inch 720p display, quad-core processor, 8MP camera, 2GB of RAM and more.

The design will also be the same, only, it will be coming with a white hue instead of a black one. Expect the little nubs, that arrived with a slight design change several months ago, and which help the device from sliding around, to be on board.

Oddly, LG has proclaimed that this will be an Android 4.2 Jelly Bean smartphone. This, despite rumors of an Android 4.3 Jelly Bean release for June 10th. It would be extremely odd to see LG release this phone in Hong Kong tomorrow with an operating system that is going to be outdated in just a few days, though it’s not out of the question.

Android 4.3 could be on the way with the other white Nexus 4 models.

Remember, Nexus devices get updated with new software extremely quickly, so the Hong Kong model could simply be updated the same day that Android 4.3 rolls out, if Android 4.3 does indeed roll out.

It’s possible that the other device will simply have Android 4.3 on board when they touch down.