Possible evidence of the elusive white Nexus 4 has appeared again as a Canadian retailer has put a white version of the Nexus 4’s bumper case up for sale even though no white Nexus 4 exists yet, at least officially.

Since the Nexus 4 launched back in November, there have been various rumors and leaks that suggest that Google and LG may have a white colored Nexus 4 in the works to join the current Nexus 4 model which comes only in black. Google and LG have not confirmed the device’s existence but it seems likely that they have one waiting in the wings. 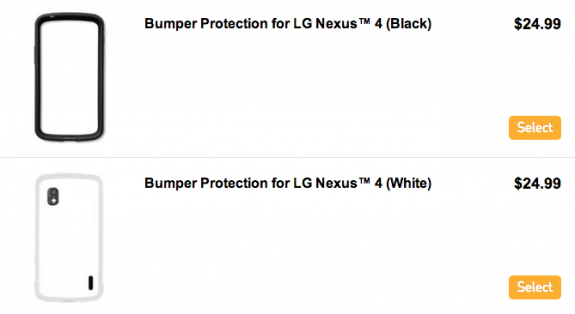 A white Nexus 4 bumper case has emerged online at a retailer.

The accessory, which is listed at $24.99, is currently available on Eastlink’s online store though it can’t be purchased online. Interested parties will have to print out a form for the device and bring it to a physical retail location for the retailer to fulfill.

We reached out to Eastlink about availability of the case but we were unable to get sort of firm reply and their contact number was continually busy. So, at this point, the case should be considered an option to black Nexus 4 owners and nothing less. 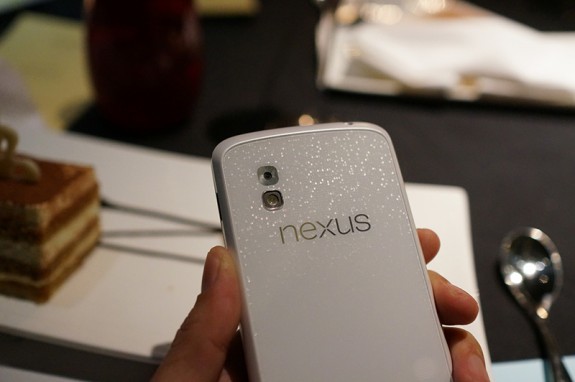 This could be the white Nexus 4.

In the past, we’ve seen accessories appear on third-party sites ahead of their actual releases on the Google Play Store. It happened with the Nexus 7 dock, Nexus 4 bumper case and the Nexus 4 Wireless Charging Orb. And it now appears that it may have happened with the white Nexus 4.

Google and LG have not announced a white Nexus 4. However, they could do so at any time. Already, we’ve seen what appeared to be a white Nexus 4 leak out and now that the Nexus 4 supply issues are under control, Google may be prepping for an upcoming launch.

At this point, Google I/O seems like a potential launching pad for a white Nexus 4 given the amount of attention that will be placed on the event. It’s also possible that it could arrive before May.