The white Nexus 4 disappeared from the Google Play Store and remains unavailable but the unicorn like smartphone has resurfaced today through a retailer in the United Kingdom, offer buyers another chance to pick up Google’s elusive white Nexus smartphone.

Earlier this year, rumors in regards to the white Nexus 4 began to pick up steam, culminating in a limited edition release of the white colored variant a few weeks later.

The white Nexus 4 has emerged. But it likely won’t be available for long.

The deal, first noticed by Android Central, does not include the white Nexus 4 8GB, leaving buyers with the Nexus 4’s most expensive option. 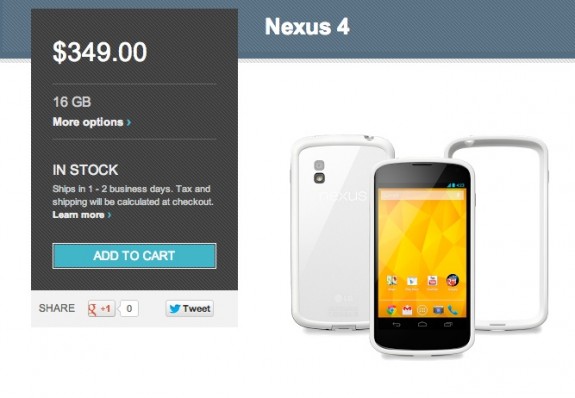 The white Nexus 4 is no longer available on the Google Play Store.

It’s unclear if Expanys will be the only retailer that offers the white Nexus 4 but there are no signs that it will emerge anywhere else at the moment. And given that the Nexus 5 is rumored for later this year, we expect the white Nexus 4 to be in short supply going forward. What this means is that buyers should not expect a healthy supply of white Nexus 4s.

The Nexus 4 just received an update to Android 4.3 Jelly Bean, making it even more appealing than it once was. It will also likely get Android 5.0 Key Lime Pie later this year, the software that is expected to launch with the new Nexus smartphone.