On the heels of the emergence of the Nexus 4 on the Google Play Store today comes a possible sighting of another Nexus 4, the ever elusive white Nexus 4 that still has not made it to shelves, months after the Nexus 4’s release. 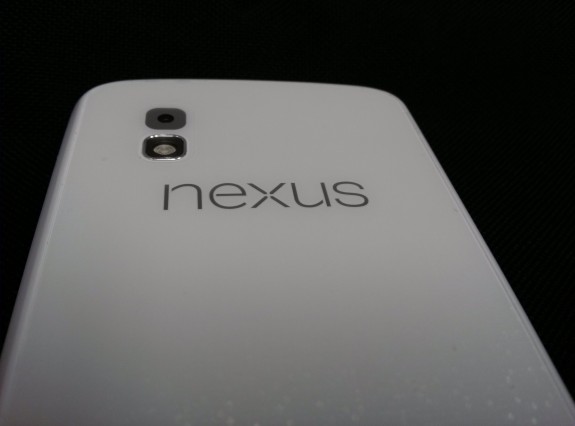 This could be the white Nexus 4.

PhoneArena has produced an image that it says could be the white Nexus 4 in the flesh. The photo depicts a phone that looks very much like the black Nexus 4, complete with gleaming sparkly textures on the back a similar camera though there is a bit of a border, and of course the familiar Nexus logo plastered on the back.

The photo evidently was taken with an LG Optimus G, LG makes the Nexus 4, so it’s possible that this could be the real deal or even a prototype of the white Nexus 4. It could also be fake or another phone using a custom back plate. At this point, it’s entirely unclear and just because the photo showed up doesn’t mean that it will be hitting shelves anytime soon.

Now though we likely be as good of a time as any as LG and Google have seemingly resolved at least some of their supply issues with the Nexus 4 with the device returning to the Google Play Store today and emerging for sale at T-Mobile and Best Buy as well.

The company could quietly introduce the white Nexus 4 or it could go for a big splash at Google I/O in May. It’s also possible that the device seen here will never make it to shelves.

Those hoping to buy the device will want to keep those fingers crossed.