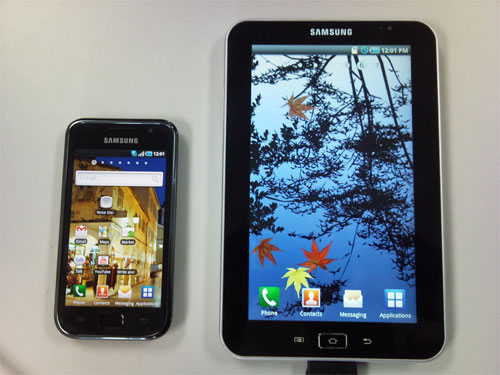 Liliputing grabbed a photo Samsung South Africa posted on their Twitter account showing off their upcoming Galaxy Tab. The photo has since been removed from their TwitPic account, but erasing stuff from the Internet is kind of like stuffing toothpaste back in the tube, isn’t it?

Liliputing notes it appears to be running the same or similar customized version of Android as their Galaxy S phone. This is further supported by a report from the Korea Herald (via Slashgear) which cites 8″ and 10″ models are also in the works.

However, I’d say the appearance of the software is inconclusive since they’ve tweaked it to look like their Bada OS, which had been previously reported as being used in their tablet codenamed S-Pad. It’s possible the Galaxy Tab is the final version of that project. Certainly they could have switched to Android in that time, but considering they just released their first smartphone running Bada, as well as the SDK, I find it doubtful they’d undercut their own OS efforts in that way.