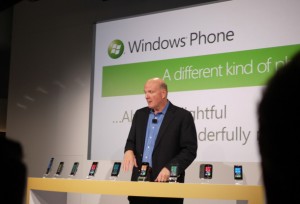 Say what you want about Microsoft taking seemingly forever to get some skin in the mobile handset game. From what I’m seeing and hearing they may have a real shot at a come back with Windows Phone 7. Microsoft did what it needed to do when it essentially scrapped everything it had done before and started from scratch. That took some time and the eventual outcome of its efforts will be measured on a much quicker time scale that is the hectic pace of the ever evolving mobile tech scene. Obviously Microsoft’s biggest competition comes from Apple and the growing Google Android market. But in my current view (and remember consumers haven’t spoken up yet) I think Microsoft has found a middle ground between Apple and Google’s approaches that will yield positive results.

Apple’s closed system approach works for Apple and continues to work for a lot of consumers. Google’s (debatable) open approach is also popular but has always struck me on some levels as strikingly similar to Microsoft’s prior Windows Mobile approach. It yields what many call fragmentation, with multiple versions of the OS scattered around on different handsets (and soon to be Tablet/Slates), and carriers taking advantage of being able to put just about anything on the device they want. Some see that as a good thing, some (like me) increasingly don’t. Google says it is going to get a handle on the OS fragmentation by slowing down releases of future versions, recognizing the long term obstacle to success that its initial approach yields. Microsoft has jumped into the middle and I think that is very fertile ground.

That middle ground is somewhere between a closed and “open” system. Microsoft has adopted strict standards for handset manufacturers. The phones have to have certain capabilities (and will be tested rigorously for same) and I think (hope) that this will lead to a more consistent user experience. I’m sure Microsoft’s “partner” approach (remember Redmond sells software not hardware) will see some carrier incursions into the UI, but there’s a chance Microsoft will be able to control more of that than it has shown a desire to in the past. I’m not sure that will happen, but there’s a chance.

The Windows Phone 7 interface also appears to be less reliant on Apps. What? Apps are where its at, right? At least that’s the current mantra. And indeed Microsoft is working huge efforts to woo developers to create for the platform. Apps will be important for many, but the “Hub” approach coupled with the marketing approach that sells the quick look at your info and move on will be appealing to many. My view here is that Microsoft learned a lot from the Netbook disruption. Consumers went to Netbooks in droves. Beyond the attractive pricing, this demonstrated to those who kept adding features to computers that more wasn’t always better. Many consumers just want to have their email quickly available, browse the web, and play some media and check out their social connections. For those who need access to documents, Microsoft’s Office Hub, (included out of the box) will give them that capability. Xbox users I’m guessing will love this phone given the integration with that platform. So, who needs Apps, when you’ve covered the basics?

Don’t get me wrong there will be Apps on Windows Phone 7. But for those who aren’t attracted to the App game, Microsoft has provided what looks like a phone experience that will more than suffice, somewhat negating the numbers game when it comes to how many Apps are in the ecosystem.

I mentioned this earlier and I think it is key. Marketing. Let’s face it, Microsoft has always been more than capable of shooting itself in the foot when it comes to marketing its products. But the approach Microsoft is using here strikes squarely at why Windows Phone 7 is different and does some more effectively than any Microsoft campaign I can remember.

Obviously the jury hasn’t even convened yet as we’re a few weeks away from consumers starting to buy these new Windows Phone 7 handsets. But from where I sit in analyzing what we know after the launch, I think Microsoft has made the right moves to position itself as a come back player here. I hope that’s the case because it will lead to more competition.