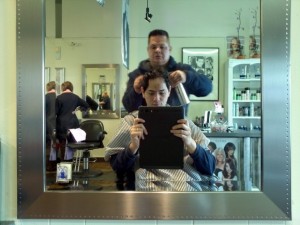 The Motorola Xoom is the first Android 3.0 and is strong enough to give us a glimpse into the future of Android tablets, but unfortunately the future isn’t quite here yet. After buying the device a couple of weeks ago the honeymoon is over and I’m going to get my $799 back from Verizon.

As I’ve mentioned  before, this  tablet does an excellent job handling multiple  Google accounts and services. If you  rely on a lot of Google services, a Honeycomb tablet might be your best bet.

The number one reason I’m returning the device is because I’m simply not using it as much as I had expected to.  The user experience still some rough edges and  I just don’t have the patience to wait for the Honeycomb ecosystem to evolve.  When I plunk down $800, I want something now…not ‘soon.’

There’s nothing incredibly horrible about the Xoom, but I think you have to be willing to be at the tip of the early adopter spear if you expect to be happy with the device. The Xoom is fast and powerful, just as the Xoom commercials promise, but that’s not enough. Here are the reasons why I’m done with the Xoom…for now.

The Motorola Xoom  has some very  impressive features and specs. Unfortunately, they’re not all  available today. The Xoom needs to be  sent into Verizon to get a 4G   upgrade “soon.”  The microSD card  slot is not functional  yet.  And Flash, something  that truly differentiates  Honeycomb tablets from the iPad, is missing in action.

It’s all too clear that Motorola rushed this product out the door before it was fully baked.   This might fly  for some geeks, but not for me. Of course I knew about the shortcomings before I bought the Xoom,  but I really liked what I saw back at CES and who wouldn’t get excited about the first credible threat to iPad?

Apps  really make or break the tablet experience. Unfortunately, the Android Market  is nearly void  of applications built specifically for tablets. At launch, there were only 16 apps listed in the top of section of the  Android Market.

While most people don’t  need 60,000 at their fingertips, it’s nice to have options.  Many of  the apps  I find most useful on my iPad  or missing in action in the Android Market. Sure,  developers will build  for Honeycomb, but I suspect they’re waiting for Android 3.0  to grab some traction before  diverting  attention away from Android smartphone apps and iOS apps.

The Motorola Xoom costs $799 without a 2-year contract or $599 with a contract. I opted for the $799 contract-free option so I could have the freedom to ditch the service if and when I wanted to.

But the Xoom’s purchase price is just part of the story. Buying the device at $799 still requires the device to be setup and activated, which means you still have to pay for a month of servie and a $35 activation fee, even if you plan on stickig to WiFi only or don’t have an immediate need for 3G service.

Most people will likely opt for the $599 subsidized price and  either the $30 or $50 per month plans. This means the total cost of ownership for the Xoom is approximately $1,350 to $1,850,  before you even buy a case  or single app  for the device.  That’s  simply too much for a device that is still not ready for prime time.

Android  tablet makers really need to convince Verizon and other carriers to allow for pricing schemes similar to what’s found on the iPad. Trying to get the average customer today for the same Internet three times on a monthly basis is a losing proposition.

I also think it would be  a wise move to introduce Wi-Fi only  versions of the Xoom or similar devices at $499 or less as quickly as possible.  You can try rationalizing  the $599 and $799  price tags  all you want, but the reality is that most consumers think the iPad costs $499.

Tablets don’t live in a  bubble.  The $799 price  is something that’s really bothered me  over the past couple weeks.  There’s a lot of other nice gadgets  the same price range that I could spend the money on. That  kind of money can pay for a pretty decent notebook, an HDTV or any smartphone on the market (or possibly two).

What I’ll Miss About the Xoom

My favorite app on the device is the email client. It’s miles ahead of the iPad’s. I generally feel like I can get more done, faster on the Xoom compared to the iPad.

I also really like how the Xoom is an independent  device, which means I don’t have to sync it  with a Mac or PC. I  hope Apple moves in this direction someday soon.