When images of the Sony Honami smartphone along with the interchangeable lens units emerged yesterday in high resolution, the Internet was abuzz proclaiming the camera-centric approach as a threat to Nokia’s famed Lumia smartphones and Samsung’s Android-based Galaxy S4 Zoom phone. However, Sony may not even be targeting the point-and-shoot market that its rivals are cornering, and instead may be eyeing the high-end DSLR and mirrorless systems. In fact, given the target demographic of prosumers, enthusiast photographers, and even professionals who may not always want to lug a multi-pound DSLR rig around all the time, Canon and Nikon should be scared of the capabilities of the versatile Android-powered, Sony-made smart camera. 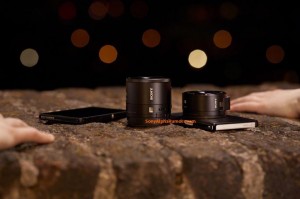 So far, the smart cameras that have either been introduced or are currently on the market take a more conventional approach. Point-and-shoot killers like the Galaxy Camera and the newer Galaxy S4 Zoom use a traditional point-and-shoot form factor and marry on a phone display to the back. At the end of the day, you’ll end up with a lot of bulk when using the device as a phone.

Higher-end devices like the Galaxy NX, an interchangeable lens camera (ILC) system has a different, but also a traditional form factor for its class. Like DSLRs and mirrorless cameras today, it has a camera body that melds together the Android operating system and wireless 3G/4G/WiFi connectivity and the versatility of a camera lens.

Sony’s Honami and lens system targets the latter market, but does so in an elegant form factor. In Sony’s vision, the phone is the camera body. The large display serves as the viewfinder display, and you have all the wireless connectivity that’s needed–Bluetooth, WiFi, NFC, 3G, and 4G wireless connectivity. You also have a robust ecosystem of apps to connect so social media networks and to share videos and photos with friends and family. And the smartphone itself has a built-in camera for when you may want to leave the bulk at home.

This is an important distinction as with DSLRs, you actually need to use a lens. Without a lens–even a compact one–the DSLR won’t work, so you would need to carry the camera body and the lens to have a functional camera setup.

With the Honami, you can get by using the camera that’s built into the phone for the days when you don’t intend on using a bulkier lens setup. If you’re out to dinner or at a club, you can leave the rest of your gear at home. Your phone will not have any bulk, unlike the Galaxy S4 Zoom on the market today.

However, if you’re vacationing or sightseeing and want a zoom lens, you can attach one and have an even better camera. Unlike the telescoping lens attachments for today’s smartphones, the lens system of the Honami is built pretty much as a standalone camera minus the display. It’s a self-contained system.

You’ll get the lens and its optical system, a separate built-in sensor that is larger and gives you even greater flexibility, potentially a better flash, a memory card slot, and some form of wireless connectivity. You’ll attach the lens to the phone via a magnet and then use the phone’s display as the viewfinder. From there, if you capture images, you can transfer and save them to your phone so you can instantly share those pictures.

It’s rumored that at launch, Sony will have a high-end option with a 1-inch sensor. While this isn’t quite up to snuff with a DSLR, a micro four-thirds system, or an APS-C size sensor, it’s only the beginning. In the future, Sony could potentially even deliver a larger full frame lens and sensor system to mount magnetically to your phone.

This would be great for photographers as like with a DSLR, when they upgrade the “camera body”–or phone in this case, they can keep the lenses and reuse them with newer phones or camera bodies.

The setup also offers more versatility than the Android-powered Samsung Galaxy NX system as you can make calls and you can still have a fully functional Android smartphone and smartphone camera with you even if you don’t take or use your lens. However, the lenses are there if you need more for your shoots.

And the sharing feature could be huge. Photographers who shoot weddings or are doing magazine shoots can instantly email and send their photos straight from the camera to their clients immediately in real time. No more transferring data.

As Nikon and Canon have both been slow in moving away from traditional DSLR sales into the mirrorless and smart camera realms, Sony’s Honami could present the biggest threat to the camera titans boasting connectivity, portability, and a slew of apps to aid the professional photographer in editing their photos on the go.

Essentially, the ILC system that Sony is rumored to be introducing for smartphones will be as good as the lens collection. As Sony grows its lens portfolio for this system and offer a variety of different sensor sizes to fit different budgets, we may have a true competitor to the DSLR market with a compact, portable, and versatile size.