Why RIM Should Abandon the Consumer Market and Tackle Hybrid Car Tablet Market with PlayBook, QNX

Tablets that double as netbooks? Phones that dock into a tablet? Asus has masterfully found its niche in the all-t0o-important mobile category that’s dominated by smartphone players like Apple, Motorola, and Samsung. However, there’s still yet another area for huge growth in the automobile industry that mobile computing companies have so far not leveraged, a domain where RIM can stem off losses in its consumer-base and still find growth in hybrid tablet car systems especially since it already owns QNX. RIM should abandon the consumer market, where it has seen its share drop in recent years following the introduction of the iPhone, and focus on making the BlackBerry PlayBook, a slate that the company has called an enterprise-class tablet, to be a hybrid convertible tablet that docks seamlessly and is well-integrated with cars and their on-board computers. Rather than have cars display information on the traditional display on a center console, that display can essentially be a dockable PlayBook.

QNX is a software company that users now associate with the PlayBook, but the company has been known to make car systems, like BMW’s iDrive, and other enterprise software systems, including those that run server farms. Fortunately for RIM, however, is that the Canadian-based BlackBerry-maker had acquired QNX, which gives it access to the automotive industry, an area that gives it very little competition with other computer- and smartphone-makers.

Current editorials on the internet speculating on what RIM should do to position its QNX operating system stop short of having RIM enter the car computing hardware business. However, that’s precisely what RIM’s playbook should be about the PlayBook, the former playbook refers to strategy while the latter is the propert name for RIM’s tablet hardware. Those editorials just dabble around linking tablets to car systems to tablets and phones and giving QNX the ability to integrate apps on mobile computing devices to the car so that you can use, for example, the Pandora app on your BlackBerry along with your phone’s wireless mobile broadband connection to stream music to your car’s speakers, or perhaps to tap into Google Maps to access navigation and lookup businesses nearby to display on the car’s infotainment system.

Video above: courtesy of Engadget; shows QNX car system linked to a
PlayBook, but how about replacing the QNX system all together with a
removable PlayBook system? After all, PlayBook is already
powered by the QNX software.

However, that’s what a RIM-owned QNX should already do and doesn’t present additional gains to RIM’s overall business strategy. Perhaps, a better strategy would be to integrate hardware and software and work closely with car manufacturers to get PlayBooks not just into cars, but integrated in cars.

Just like Asus’s hybrid concepts, why not have the GPS navigation screen inside a car like a BMW be a PlayBook display that can be co-branded or re-badged as a BMW iDrive Tablet? That way, users can either leave the tablet in their vehicle, or take it with them if they need to look up information or share a document or presentation at a business meeting? The model that I am proposing would involve using the PlayBook, as a removable tablet concept, to be built into the center console of the vehicle. Many new cars have a large screen–either touch controlled or via hardware navigation buttons–to display GPS or on-board computer readings. RIM, through its QNX branch, could replace that screen with a tablet that’s made to integrate into specific model cars and have a removable PlayBook that users can take with them when they leave the car should they choose to. 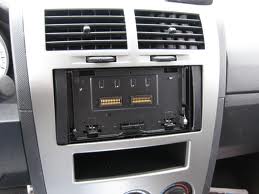 Car with a removable faceplate for the stereo system; after-market solution

The removable screen system has been implemented before in the past with after-market car stereo systems where users can remove the faceplate, which includes the small display and stereo control buttons, when they leave the automobile. This would be akin to those ‘single-DIN’ and ‘double-DIN’ multimedia car systems, but would use a huge tablet rather than clunky button controls, and if RIM works with car manufacturers, it would release slightly customized PlayBook tablets with custom software for each vendor.

These systems would offer car drivers more value as well as it would have the capability of integrating with the car’s on-board computer (OBC), which would allow drivers to track gas mileage, have maintenance warnings pop up, and other important car information accessible on the PlayBook itself. 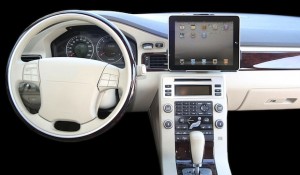 ProClip (ProClip USA) offers an excellent dash mount solution for modern tablets, but those tablets don't integrate into the car with OBC readings and controls

Currently, as I drive an older car without an integrated GPS, I use a ProClip mount solution–highly recommended–along with a tablet, either a Galaxy Tab 7-inch or an iPad, and navigate around town that way. After having experienced the joy of seeing my Navigon maps on a 7- or 10-inch display, I can’t go back to looking at a smaller screen when driving around town, but the current non-integrated tablet limitation is that the tablet doesn’t integrate with the car. I’d still have to try to access the car’s stereo controls to change radio stations, and I’d have to fiddle with the car’s climate controls to change the temperature. RIM can potentially make it all easy and integrated into the tablet through the partnerships that QNX already has.

Mobile partnerships have been made in the past to have a closely integrated phone experience in cars. Daimler Benz had worked with Motorola before to integrate the company’s V60 phone inside Mercedes vehicles in the pre-smartphone days. Those partnerships have been seen as less relevant now that there are so many phone models to choose from and so many smartphones that consumers now would rather select a phone/smartphone according to their tastes rather than be dictated by the car they drive. Additionally, the popularity of Bluetooth also negates the need to have an integrated car phone as users do not need to rely on car manufacturers to integrate special connectors to route call audio to the car’s speakers via a wired line.

However, with the tablet market, RIM can play up some of the advantages that it offers with an integrated accessory model. Co-branding to appease the car manufacturer, integration with OBCs to deliver value to consumers, and offer the robustness of QNX to drive everything in the car would make a car with an integrated PlayBook as the main center console display be a worthwhile venture.

Additionally, with wireless capabilities–promised to be forthcoming in future PlayBook models–RIM and its QNX arm could help car makers roll out updates to the car’s computer systems with ease–no more DVDs to try to install into the system, and no more need for drivers to take their cars into the dealers to get their cars’ computers updated to the latest OS. All that can be done over the air (OTA) via a WiFi connection if the car’s parked at home, for instance, or through integrated mobile broadband connectivity. Maps will always be updated, and OBC recordings can be easily accessed from the PlayBook whether at home by the driver or at the dealer by the service tech. 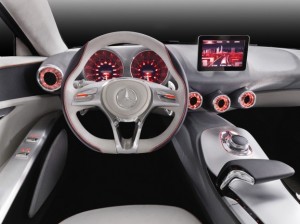 In the past, auto shows and car shows have demonstrated tablet integration, but none of them come with the fine tuning nor well-coordinated integration that QNX can leverage and RIM can make happen with the PlayBook car computing tablet. Those tablets on display at auto shows were nothing but more elegantly displayed iPads through the use of a mount like the ProClip system I’ve made mention.

At this time, it seems unlikely that Apple would want to open up iOS to car-makers, and Android’s fragmentation may prevent car-makers from adopting the platform. Additionally, MeeGo’s slow start may be a good thing for RIM if it can mobilize in time to court car companies.

As RIM currently owns QNX, it could potentially close off the QNX OS to be licensable only on its own hardware, like the PlayBook, which may close off competition to other makers entering this space, unless car companies want to work with other tablet-makers to deliver a MeeGo, Android, or Windows solution for their cars. As car solutions have to not only be reliable, but deliver ease of use, RIM can potentially tap a market that it will find itself unrivaled for some time to come as car makers and drivers don’t want to risk a reboot in the middle of driving with a competing OS or hardware.