Why Steve Jobs Would Be a Better President Than Obama

Just as congress and the president are bickering over raising the federal debt ceiling, news comes from the BBC that Apple has a larger cash reserve than the United States of America (Apple has $76.4 billion, the U.S. has $73.7 billion).

So we are going to do what any sensible person looking at these two stories would do. We are going to suggest that Steve Jobs run for president. We predict that not only will he be better at the job than Barack Obama, but that he will be the greatest U.S. president we have ever seen.

Why on Earth would we suggest such an outrageous change of command? After all, Steve Jobs has never run for public office. But when you look at the positives he would bring to the country, it’s impossible to deny that he would make mincemeat of what our current commander-in-chief has done. 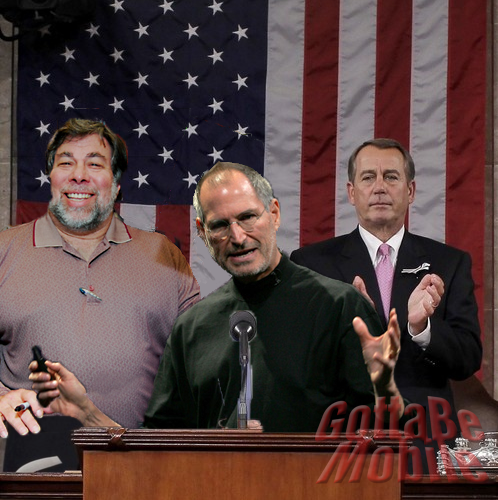 Yet they are always pretending. They have to put on a face that they’re these nice guys whose loyalties are, first and foremost, with the American people (as if any two Americans can completely agree on anything, much less the direction of the country). All presidents are a**holes, but they’re usually closet a**holes.

Steve Jobs makes no apologies about being an a**hole. Sure, he smiles when he’s pitching a new product, but even then it’s more of a smarmy smirk than a warm ray of sunshine. Nobody makes the mistake of thinking he’s Mr. Rogers. He cuts through the B.S. and saves his energy for what really matters. 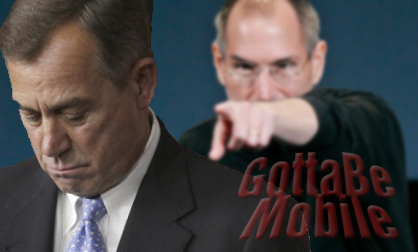 While this could be off-putting to some, it’s the perfect quality for the president to have. The thing about a**holes is that they know how to get stuff done. Steve Jobs doesn’t waste energy on niceties.

Consider this story from Those Guys Have All the Fun: Inside the World of ESPN (pointed out by John Gruber at Daring Fireball):

Jobs just looked at him and said nothing other than “Your phone is the dumbest f***ing idea I have ever heard,” then turned and walked away.

You know what you’re getting from Steve Jobs. He’ll be the first politician in history who isn’t two-faced. He can’t possibly be two-faced because he wears his a**hole-ness on his sleeve.

Contrast this with Obama, who makes grandiose, rousing speeches that stir the emotions of his supporters – and then proceeds to deal most of those promises away before negotiations have even begun.

Jobs’ speeches will stir emotions, but he won’t make empty promises. In fact, as head of the most secretive government in history, the only promises he makes will be ones he has already been working on for the better part of a year. Major government overhauls and new initiatives will typically be announced two weeks before they’re set to take effect.

Half of the country won’t like Jobs, but they’ll know what they’re getting from him. This will build trust and respect.  His approval rating will be through the roof, and America will be united.

As president, Jobs will require that all congressional bills that cross his desk be simplified. And when we say ‘simplified,’ we really mean it. There will be no more 200-page manifestos, filled with pork, earmarks, and fine print that nobody can possibly follow.

Jobs will declare on Day One that he isn’t signing anything that can’t be summed up in two sentences. The two sentences will have to be displayed in a black Myriad font with a white background. Corresponding images and promotional videos will be expected as well. Paper will not be used – all bills will be presented as stand-alone iPad apps: 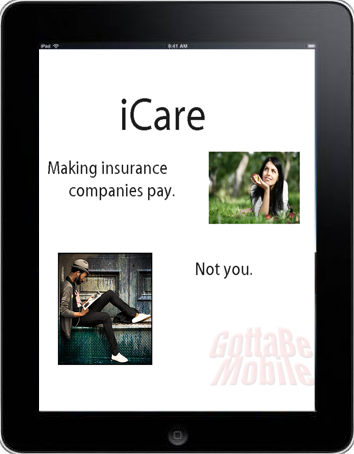 An example of a health care bill in the Jobs era.

The biggest strength Jobs will have when it comes to congress, however, will be the leverage he will have on all of them. Every member of Congress will have been lobbied by some company or organization. Every one of those companies will be violating some patent which is owned by Apple.

The choice for congressmen will be very simple:

Do you want to support Jobs’ latest initiative, or do you want the organizations that are funding your political career to go bankrupt defending patent infringements?

It will be win after win for Jobs’ administration.

As iconic a look as the White House has, Steve Jobs will decide that it’s time for an update. He will task Apple Senior VP of Design Jonathan Ive with redesigning the White House.

As White House 2.0, it will be known by most as iHouse. It will feature a familiar look, borrowed from Apple’s successful retail stores. 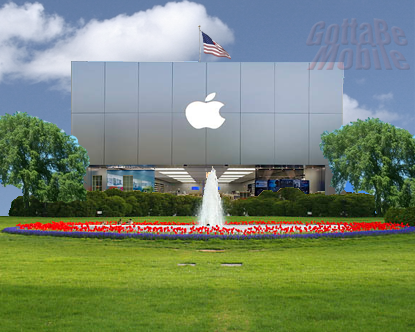 Tourists will be free to enter the open front, where they’ll be greeted by iHouse staffers (known as ‘Creatives’). If the citizens simply want to take a look around, they’re free to do that.

If, however, a person has a problem with something that is going on in the country, he will be ushered to the Genius Bar in the back of the iHouse. A Genius will be waiting to hear out his complaints, to which he will listen patiently. If the American’s complaint can’t be immediately resolved, he will be granted Apple Store credit and will walk home happy.

In addition, the iHouse will no longer be limited to Washington D.C. iHouses will pop up all over the country, in which citizens can have their voices heard and their needs satisfied.

The large number of iHouses will also serve to greatly increase the president’s security, as nobody will ever really know which iHouse Jobs is living in at any given time.

In a gesture of unity and making amends, Jobs will select his Apple co-founder, Steve Wozniak, as vice president.

If you think Joe Biden is a gaffe waiting to happen, wait until you see Woz. He’ll regularly be caught on a live mic speaking of A.I. robots taking over the world. But it won’t matter, because people will just love him.

The mood at press conferences will be lightened, as he will frequently interrupt them with impromptu magic shows. Media cycles will be dominated by the quesiton of which Android phone he is toting this week. 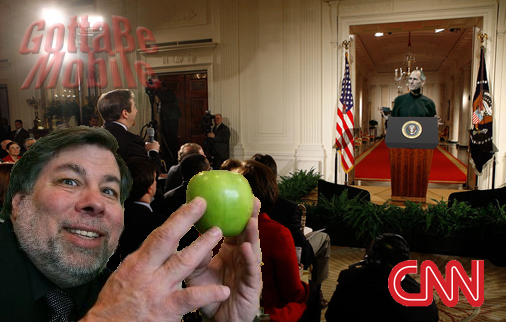 Woz’s fuzzy teddy bear presence will become a symbol for easing up, smiling and enjoying the ride. Americans will be happier than ever.

With Jobs putting his own spin on the way that the country is run, who better to be the administration’s spokesperson than someone who has been reviewing his products for years? Walt Mossberg will fill the role of iHouse Press Secretary like no other.

In a bold move, Jobs will bring on Mossberg as press secretary without officially making him part of the administration. In fact, Walt won’t directly associate with anyone in the iHouse. This seemingly illogical move will pay huge dividends, as Mossberg’s distance from the administration will build a trust with the media and the public that no spokesperson has ever had. 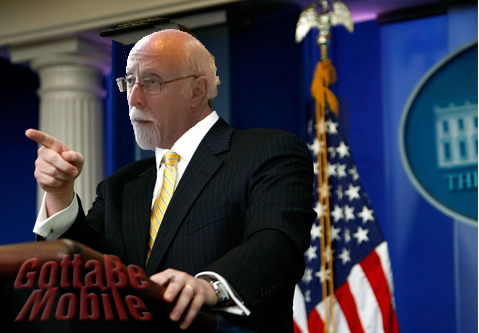 Who better to speak for the iHouse than the nation's most trusted tech journalist?

Walt will begin every press conference with an in-depth, unbiased review of Jobs’ latest moves as president. He won’t mince words and will be the first to criticize the president when his actions merit it.

This balanced view will give an immense power to his words, and when he does ultimately come to the conclusion that Jobs is doing his job better than any other President in history, we will all agree. The press – and the entire country – will come to a silent agreement with the administration. It will be an unprecedented moment in history.

Kick-ass State of the Union Addresses

But the real highlight of the Jobs administration will be his State of the Union addresses. They will kick ass.

Hotly anticipated for months, blogs will spend the better part of the year speculating about rumors and leaks of what he will announce. When the day finally comes, they won’t disappoint. For the first time, congress’ applause will be completely sincere. 95% of Americans will tune in to watch. 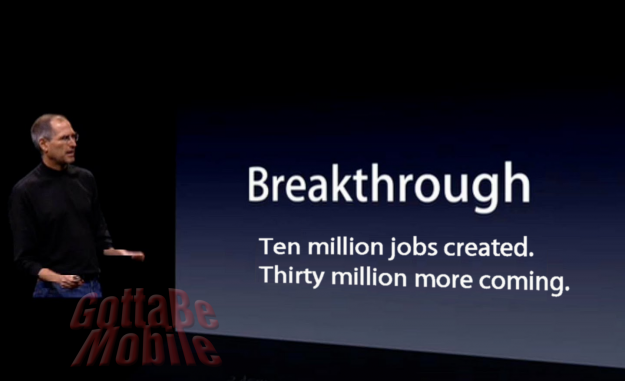 After about 50 minutes of exciting announcements and news of breakthroughs, the words everyone in the country has been waiting for will be uttered:

President Jobs’ “one more thing” will always be something absolutely amazing. It will be Christmas in January every time.

During his first State of the Union, everyone in the country will be given a free MacBook Air. In his second year in office, everyone will receive shares of Apple stock. For the year after that, everyone’s home will get a built-in Apple Store.

It will be like “Oprah’s Favorite Things,” only you don’t need to be in the studio audience to get in on it. It will be the most wonderful time of the year.

For a Brighter Tomorrow

So, fellow Americans, we implore you to look within. Don’t just settle for what we’ve come to expect from a president. Look at what we could have in a president.

We need a president who is an a**hole and isn’t ashamed of it. We need a more efficient congress. We definitely need free MacBooks.

This message was designed by Apple in California. Assembled in China.