Buying a cheap Android tablet sounds like a great way to get someone in your life connected to the Internet for next to nothing, but there is a big reason you should never buy a cheap no name Android tablet that you find at Walmart, Walgreens or even Best Buy.

Cheap Android tablets offer the promise of an affordable way to connect to the Internet and gain the many benefits of portable connectivity, but a recently investigation found that many of these tablets ship with security problems that could expose your personal information. Stack this on top of many complaints about poor build quality, tablets breaking after several months and batteries that inflate like balloons and there are clear reasons to avoid wasting your money on a cheap Android tablet.

Cheap Android Tablets are note worth the price.

You can still buy an Affordable Android tablet, including several options around $100, but these cheap Android tablets that appear on store shelves during the holidays and throughout the year are more of a risk than a deal.

There is no doubt that a $40 Android tablet sounds like a great deal, but you trade security and your privacy to use these Android tablets. Security firm BlueBox released the results of an investigation into cheap Android tablets and discovered a shocking number of security vulnerabilities. On the BlueBox website, Andre Blaich writes,

“What we found was shocking: most of the devices ship with vulnerabilities and security misconfigurations; a few even include security backdoors. What seemed like great bargains turned out to be big security concerns. Unfortunately, unsuspecting consumers who purchase and use these devices will be putting their mobile data & passwords at risk.” 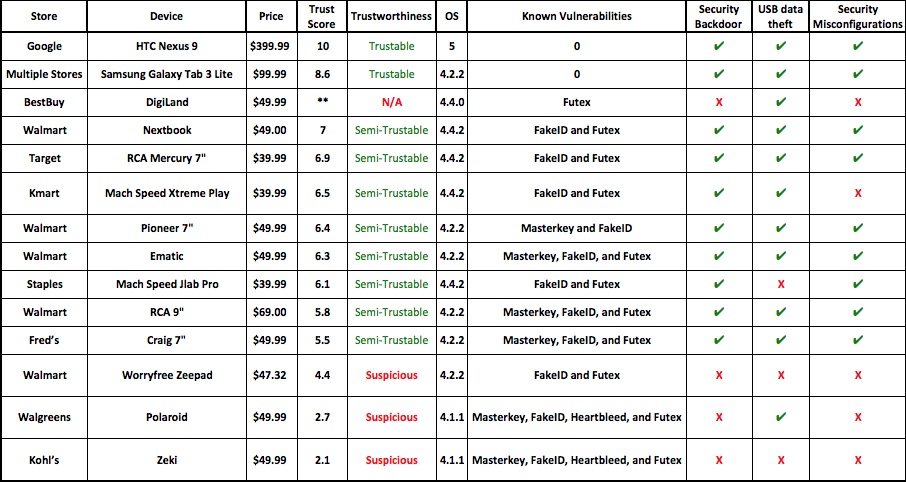 Watch out for cheap Android tablets that trade your privacy and security for cheap prices.

Even if you can get past the security issues with many cheap Android tablets there is another major concern — reliability. Cheaper build quality and parts that make a $50 Android tablet a possibility lead to faster breakdowns and can result in a broken tablet within months.

We routinely hear about battery life dropping below 30 minutes, tablets that only last a week before breaking and poor customer service. On Amazon Yulanda shares a troublesome experience with a cheap Android tablet from RCA,

“I bought three tablets from Walmart and I believe I have encountered every issue possible! The problems were from screens freezing, dark resolution, and the least jolt will crack the screen and it will not ever work again! Each time the screen is cracked I have to pay $20 to get it fixed. They only last for a week or so before something goes wrong with it, when you send it in for repair it takes 4-6 weeks to get back. I currently have all 3 packaged to send off again after only having them back less than a week, this has to be the 6th time sending them back!!!!! So frustrated!!!!”

You’ll also see complaints about cheap Android tablets that don’t last through the early part of 2015 after people unwrap them in late December. John Matarese shares the story of one owner below.

Instead of wasting money on cheap Android tablets, look for deals on name brands. Best Buy currently sells the Acer Iconia Tab 8 that is $139 with a $40 gift card. This effectively brings the price down to $99 for an Android tablet that is worth buying.