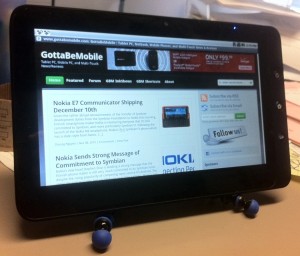 Updated: Sorry, the fix is proving unreliable. As shown in the photo, it worked fine yesterday after the initial install, but it isn’t connecting today, tested with multiple routers.

While the TEGA v2 tablet from Tegatech is capable of dual-booting Windows 7 and Android 1.6, you may have noticed little attention paid to the latter half of that equation. That’s because Wi-Fi access on the Android side has been a no-go. I expect that to change now that a fix has been released.

“Fix” might not be the right term. Rather, a new version of the Android OS with working Wi-Fi was released on the 3rd. Instead of patching the existing OS, it’s a fresh install that overwrites the old one. Any modifications already made in Android will get wiped out, not that anyone was doing a lot with the Android side without Internet access. I already did the install successfully and figured out the few extra twists involved.

First, the fixed version is on the website labeled as “Android 1.6 (WiFi included)”. Included in the zip download is the UNetbootin installer, but not the instructions labeled “Dual Boot Manual”. That will need to be downloaded separately. The partitioning and Windows installation are already done, so following the manual, installation begins with Step 3.

Before getting into it, you will need a USB keyboard and a USB flash drive with at least 1GB of space. The install requires booting from that flash drive, which requires keyboard control for the BIOS. For simplicity’s sake, all the files from the zip package should be unpacked on to that flash drive.

UNetbootin should be launched from the flash drive. As shown in this screenshot, both the ISO and target are the flash drive, in this case labeled as the F: drive. That will take a little bit of time to run before you are prompted to reboot. 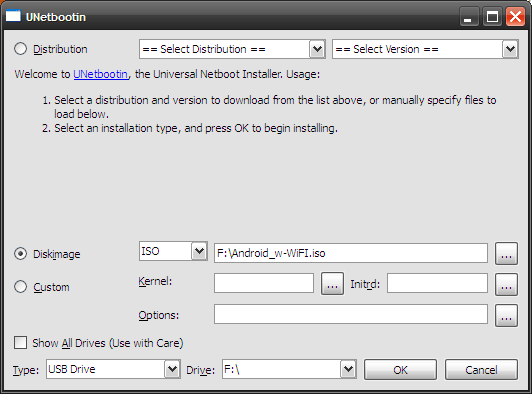 I don’t know if all these steps will hold true for everyone, so be attentive. Whatever you do, DO NOT wipe out the NTFS formatted partition because that is definitely the Windows partition. Aside from that, I don’t think there’s much to worry about. I muddled through and had to figure out these amended instructions along the way. Can’t be that hard, right?

Haven’t gone through all the little features unlocked by having Wi-Fi access yet. There is an app store but not the official Android Market. I’ll need to look into a sideloading option that downloads apps to the shared microSD card.

One alarming thing I’ve noticed is that battery usage with Wi-Fi on is extremely high. Yes, I know Wi-Fi drains power, but I mean the battery meter is practically dropping as I’m looking at it, markedly faster than what I see on the Windows 7 side. I’ll have to do some timed testing on this, but it’s definitely not lasting any longer in Android than in Windows. Makes for a bittersweet victory.

Edit: I forgot to specify, this version enables Wi-Fi but not Bluetooth. Haven’t tested 3G but I’m guessing it’s not working either.

Edit 2: BTW, you can also run Android from that flash drive, not just on the TEGA but any PC.