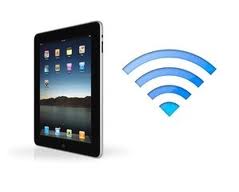 Misery loves company, or so they saying goes. Frankly, I’d prefer to be in solitude instead of having WiFi issues on iOS devices. Last week Apple pushed out an update to its iOS operating system (4.3.3) that was meant to quash the location database “bug.” Well, apparently users are seeing some issues with WiFi and 3G connectivity since installing the update.

Here’s what I’m seeing. I have a dual band router at home. On the iPad I set it up for the 5GHz band. In places throughout the house where I’ve previously had great signal, I’ll lose the WiFi signal. I’ve reset the Network Settings and that doesn’t seem to help. I’ve tried the 2.4GHz band and see the same result.

Since the iPhone doesn’t recognize a 5GHz signal, I’ve seen the same issue on the 2.4GHz band there as well, although I frequently don’t use WiFi on the iPhone since the 3G coverage is usually good throughout the house. That said, CultofMac is reporting that some users are experiencing 3G connectivity issues as well. Here’s what I’m seeing in that case. Like I said at home I stay on 3G most of the time. But at the office I will turn on WiFi since our older building sometimes doesn’t allow a 3G signal through. If I walk outside of our office building typically the WiFi signal will fade off and disconnect picking up the 3G signal for connectivity. What’s happening since the update is that the switchover is not as automatic as it used to be and there will often be a long lag before things are sorted out, unless I turn off WiFi.