Adam shared news that the Angry Birds franchise will launch what they say will be the biggest Angry Birds release since the original on March 22nd, 2012. What the article doesn’t say is what OSes are getting the release. Windows Phone, while getting a ton of buzz thanks to Microsoft and Nokia’s efforts, might not make the cut. If you think about the resources involved in coding the game for multiple platforms, it might not make sense to the Rovio.

My guess is that it will only launch on iOS and Android devices on March 22nd.

If you look at the different Angry Birds versions available on iOS and Android now and then compare that to Windows Phone, it’s clear. 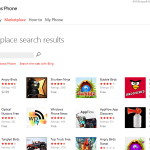 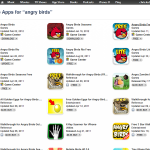 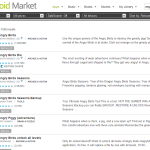 This doesn’t include the seasonal games that Android and iOS users get.

Is this wrong to leave Windows Phone out? I personally don’t think so but I would love to see Windows Phone included in these epic releases of major games and apps. Windows Phone won’t grow without apps. When someone decides it’s time to leave their iPhone behind and grab a Windows Phone, are they going to stick it out when they realize apps they have been taking for granted aren’t available on Windows Phone or are they going to return it and grab an Android phone? I am leaning towards them returning it. This is based on my own experience and from friends, family, and followers who have told me that they tried Windows Phone and returned it within a month.

Anyhow, just my two cents for the day. Come on Rovio, prove me wrong. Release on Windows Phone too.

Check out this teaser that Rovio posted…

Just for the record, I am one of the few people in America that hasn’t been sick with Angry Birds Fever. I do have Linsanity though. I played Angry Birds for about 8 hours in one day on the iPad when it was launched and haven’t played since, well except when my wife or son get stuck.