Though Apple had repeatedly denied that a laptop running OS X with a touchscreen would lend to a good user experience, a recent patent filing may indicate that the MacBook-maker is exploring similar hybrid convertible form factors that Microsoft OEMs have been experimenting with since the launch of Windows 8. The patent shows a laptop design with a detachable display–not unlike Samsung’s ATIV Smart PC and Smart PC Pro–and includes wireless charging. 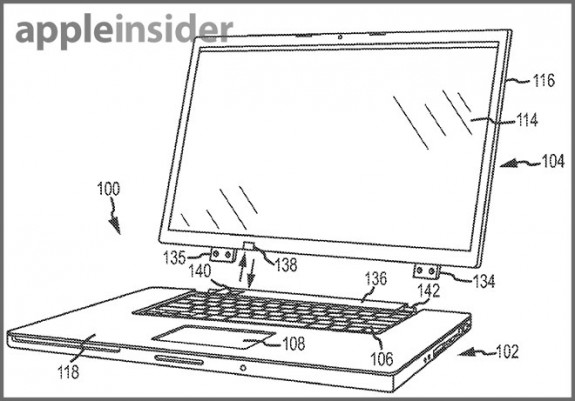 The patent submitted to the United States Patent and Trademark Office was discovered by Apple Insider and shows that the laptop’s touchscreen display can be detached and removed and that the configuration can be recharged wirelessly through the use of inductive charging, similar to the Qi protocol that’s gaining momentum in the market today. At least the hybrid part of the concept would be similar to Microsoft’s own Surface Pro hardware.

It’s unclear if Apple will ever commercialize such an idea. Under the leadership of late co-founder Steve Jobs, Apple had brushed off the convertible form factor in the past, stating that the more power-efficient and powerful iOS software was great for a tablet experience while OS X is reserved for desktops and tablets. In terms of tablets, Apple leans towards the touchscreen for input and says that its predictive touch input keyboard is perfect for the job while at the same dismissing touchscreens for laptops as the company says that it would slow down workflow as consumers would have to move their hands too far away for the keyboard. Instead, it opted to implement touch and gestures through its capacious trackpad.

Critics of touchscreen and hybrid form factors have been hard on Microsoft’s Windows 8 and its OEM partners. CNET‘s Scott Stein and Dan Ackerman suggest that the platform is losing its value and luster as Microsoft had implemented steep price cuts at its retail stores.

However, the cuts may not be due to consumers losing confidence in the hybrid form factor, but may be be more a matter of technology’s rapid change. With Intel’s new chipset slated for new machines later this year, price cuts may be warranted to move old inventory before new systems can be introduced in the future. Moreover, given that Microsoft’s full-desktop OS and its Ultrabook-class specs have to compete against a $500 iPad or $330 iPad mini, prices begin to look a bit high on these touch-based hybrid systems.