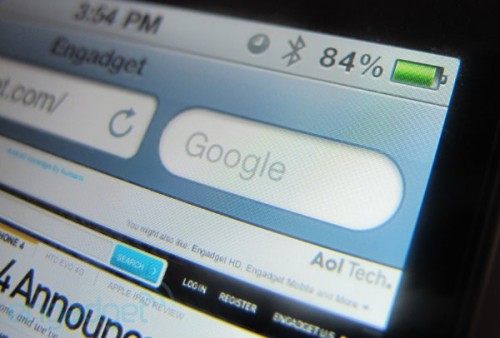 Some folks are getting their iPhones early, and the big media reviews are already out. Apple’s next gen operating system iOS4 is out as well. Based on what I’m reading I’m wondering if battery life isn’t going to be the story or at least one of the big stories.

Several folks who have installed iOS4 on 3GS and 3G models are reporting bigger hits on battery life. 3G owners seem to be hit worse than those with the 3GS. From limited personal experience I’m seeing battery life decline more rapidly using a 3GS, but I haven’t really been able to determine anything beyond my anecdotal observations. A local friend says that turning off Push on his phone resulted in battery life returning to normal, but obviously that’s not a desirable solution.

I did notice Joshua Topolsky’s statement in his review of the new phone and that aroused my curiosity.

The battery life on the iPhone 4 has been outstanding thus far, exceeding our expectations for longevity during testing. We’ve only had a short time to use the phone, but in the week or so we’ve been carrying the device as our main phone, we’ve had pretty amazing results under normal to heavy use. In fact, we managed to squeeze more than 38 hours — yes, 38 hours — of life out of a single charge using the phone as we normally would. We’re talking calls, some gaming, lots of push email and calendar invites, playing music over Bluetooth in the car, and just general testing (like downloading new apps, rearranging icons, tweaking settings).

I’m anxious to try this out for myself and hear from others about this as well. The reason for my interest here is a simple one. I went on record early after the iPad release stating that battery life was the killer feature of that iDevice on launch. I still think it is. It has become accepted that SmartPhones or SuperPhones or whatever you want to call them have real issues with battery life. That’s accepted as in, oh well, that’s just a part of the game. The iPad changed that for non-phone mobile devices and set a new bar. If Topolsky’s reporting holds up in the majority of cases (face it, everybody uses these devices differently and that usage determines how quickly juice is eaten up) then Apple would really have something to crow about. Intriguingly though, I’m not seeing this mentioned as a major point in the other early reviews. I don’t know if that means the reviewers didn’t have enough time to pass judgment here or what, but I think those kind of numbers are game changing for the Smart/Super phone segment if they hold up.

On the other hand, if 3G and 3Gs battery life is less than expected (as it looks to be) there’s going to be quite a bit of talk about that as well. But then, that puts Apple in a position to say, it is time to upgrade.