In a non-scientific test involving a baby recorded on a short 35-second YouTube video clip, it appears that Apple’s iOS 6 may in fact be more intuitive to use than the new iOS 7 beta that was introduced at WWDC earlier this summer and is scheduled for a fall launch. If iPhone fatigue was a challenge was Apple, the new design change may pose an even larger problem with the resulting user experience for the iPhone-maker.

iOS 7 marks a radical change in software design and aesthetics, eschewing years of skeuomorphic design trends from all prior generations of iOS software, including iOS 6, in favor of a more minimalist approach heralded under the leadership of hardware designer Jony Ive. In fact, Apple declared on stage that iOS 7 is the most important change to happen to iPhone since the iPhone’s debut in 2007, but is that necessarily a good thing?

In the video clip first discovered by Redmond Pie and embedded below, a baby was able to fluently use iOS 6 with relative ease. When handed an iOS 7 device–it appears to be an iPod touch running the beta version–the baby reacts with confusion.

For instance, when you turn on the display, a big noticeable change is that there is now no visual slider to alert users of how to unlock the smartphone. Instead, Apple just posts a note saying “Slide to unlock,” without alerting users of how to do so. Additionally, there are arrows at the top and bottom of the screen, but sliding from top down only opens the Notifications Center and sliding from bottom up opens the Control Center panel, neither of which unlocks the phone. Unlocking only happens with a sideways swipe, but that isn’t immediately apparent to new users of the platform, especially those coming from Android where you can swipe in any direction to unlock the device. 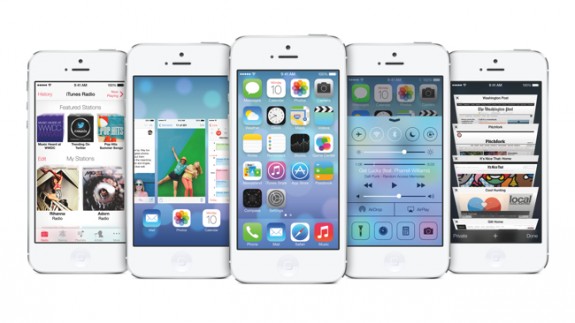 And while on the surface, this may be reason enough to criticize Apple on choosing form over function when highlighting the new user experience of iOS 7. However, if the confusion of iOS 7 resonates to a larger pool of younger audiences, Apple may have a lot of reason to be concerned.

Recent studies show that there is an emerging trend with younger users choosing options other than Apple in the mobile space, noting iPhone fatigue as the main culprit where the iPhone has lost its cool and younger users want more flexibility. Microsoft’s latest ad highlighting Nokia’s Lumia smartphones with its camera performance pigeon-holed Apple users as being in the older demographics.

With the added confusion to the user experience, Apple may have a hard time trying to win over these young smartphone consumers.