Will the Nexus 7 LTE Be Available for Verizon? Verizon Wireless Clarifies Confusion.

After being available with a T-Mobile SIM since the Nexus 7 LTE became available for purchase and more recently with an AT&T SIM Activation Kit, Verizon Wireless customers were left wondering if the Nexus 7 would be coming to the largest LTE carrier in the U.S. At its launch event, Google had boasted broad LTE support in a single tablet model that could work on networks operated AT&T Mobility, T-Mobile US, and Verizon Wireless, but Verizon thus far has not announced its intentions to support or offer the tablet.

The situation was made worse on Twitter when Verizon Wireless’ social media support flat out told customers that the tablet won’t be working with its network and “can’t be activated.”

This would be a blow to Google as not only is Verizon the largest U.S. carrier, but the carrier also operates the largest LTE footprint of any U.S. carrier, guaranteeing that if you’re in a major market you’ll likely have LTE coverage. 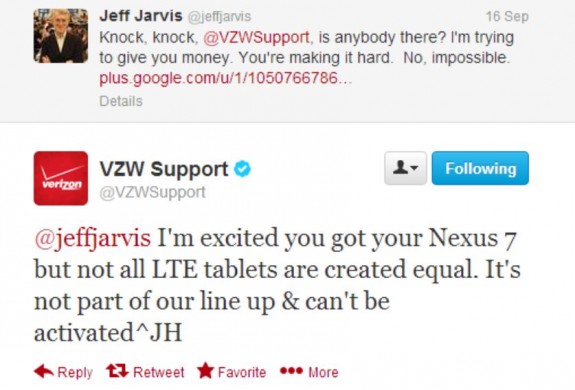 When writer Jeff Jarvis asked Verizon about the tablet, the @VZWSupport Twitter handle responded to him saying, “I’m excited you got your Nexus 7 but not all LTE tablets are created equal. It’s not part of our line up & can’t be activated.”

The carrier has since responded and offered a statement to Android Central stating that the tablet is still being evaluated and once that is done, an official decision would be made.

“This is not yet a device that is Verizon 4G LTE certified,” Verizon told the publication. “We’ll let folks know when it’s certified.”

At this time, a number of users are reporting that though Verizon won’t activate the tablet as a new device with a new SIM, you can remove a SIM card from an existing device and place it in the Nexus 7 and the slate would connect fine to Verizon’s 4G LTE network. Jarvis had tried and a screenshot shows that his Nexus 7 LTE is able to connect fine to Verizon’s LTE network. 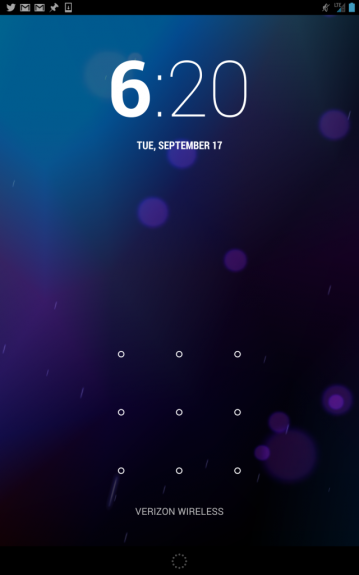 Unfortunately, Verizon won’t activate new SIM cards without a device that’s certified, so this means that new customers who want the Nexus 7 LTE and Verizon service won’t be able to do this unless they can borrow a data-only device for the SIM activation process from somewhere else.

Still, Verizon’s comments may be in violation of FCC rules. As Jarvis wrote in The Buzz Machine, in order to bid and win on the 700 MHz spectrum that Verizon currently operates its LTE network, the carrier had to make some concessions. One of which is that Verizon cannot “deny, limit, or restrict the ability of their customers to use the devices and applications of their choice on the licensee’s C Block network, except” when the devices are incompatible with the network, causes harmful interference, or is prohibited by the government.

With some irony, Google was another bidder in the spectrum and insisted that the FCC regulated the sale of the spectrum to ensure the very compliance. Now, Verizon’s policy is crippling Google’s unlocked device from operating on the LTE spectrum that Verizon had won in that bidding war.

Right now, the Google Play Store is listing three separate versions of the Nexus 7 LTE tablet. All three versions are sold unlocked and should work with any of the carriers that it was originally announced for, including AT&T, Verizon, and T-Mobile. There is a SIM unlocked version without a SIM in the event that you already have a SIM and service activated and just want to transfer your SIM over, an unlocked Nexus 7 LTE for AT&T’s network that will ship with a new AT&T SIM, and an unlocked Nexus 7 LTE for T-Mobile’s network that would ship with a new T-Mobile SIM. The tablet, the hardware, and the LTE bands that it supports is the same in all cases, so it really doesn’t matter which tablet you pick up in the end, provided you can get LTE service. 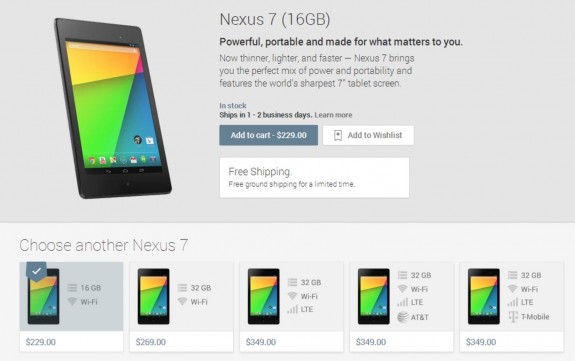 One potential reason that there may be a snag on Verizon is that though the tablet does fall back on 3G for GSM carriers, Verizon is a CDMA carrier and the Nexus 7 LTE doesn’t support Verizon’s older 3G CDMA or EV-DO network for data. This means that when outside of a Verizon LTE coverage area, you cannot connect to Verizon’s 3G network. On AT&T and T-Mobile, you can fall back on GSM/UMTS/HSPA+ for 3G data when outside of those GSM carriers’ LTE network coverage area. In Verizon’s case, the issue may not be too big of a problem given that Verizon has nearly blanketed its entire 3G network with 4G LTE coverage, so in theory you don’t need to fall back to 3G unless you venture off into some obscure area or when Verizon’s LTE network is temporarily down, as was the case a few times in the past when Verizon was building its network.