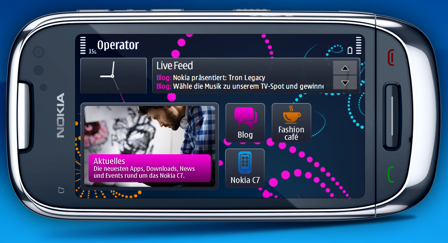 At Google I/O, the big news coming out of Android 3.1 Honeycomb is that the tablet edition of Android would support re-sizable and scalable widgets to take up as much or as little screen real estate as a user desire, and it looks like that feature may be headed to a Nokia-made Symbian smartphone in the future as well. Photo renderings of current-generation Nokia E7 and Nokia C7 smartphones were found on the company’s Germany portal with widgets of varying sizes. As the current edition of the mobile operating system found on those two smartphones, known as Symbian^3, does not support this capability, it’s unclear if scalable widgets will make it to the company’s Symbian smartphones through a future firmware update, like Symbian Anna, or if it’s just a bad Photoshop job and an error made by the web developers. 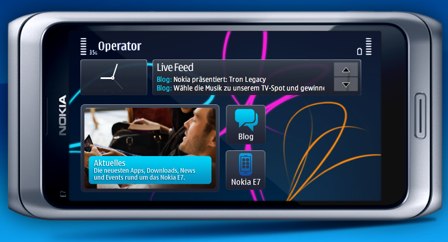 On the Android platform, currently Motorola smartphones with either newer versions of the MOTO BLUR user interface or the Verizon Droid’s widgets UI support scalable widgets. The benefit of this is that for select widgets that offer more information or are more important for your daily use, such as for example the calendar widget, you can size those widgets to be larger to glance more information without having to open an app. Weather, for example, can be scaled smaller if you’re just interested in the current day forecast and aren’t interested in the weekly forecast.

On Nokia smartphones, scalable widgets may help users place more widgets on their homescreens. Unlike newer Android smartphones, which have 5 or 7 home screens, Symbian^3 currently only offers users 3 home screens, so real estate for widgets is more valuable as it is more limited on Nokia phones compared to the Android counterparts.