Will Sony's Next Tablet Run Android or Windows 8/RT?

A new Sony tablet device was recently spotted at the FCC for U.S. regulatory approval with little information attached to it. The tablet bears the model number SGPT1211 and is described as a “Tablet Device,” but little else is known about this slate, including what operating system will be used.

The FCC certification was discovered by Xperia Blog. 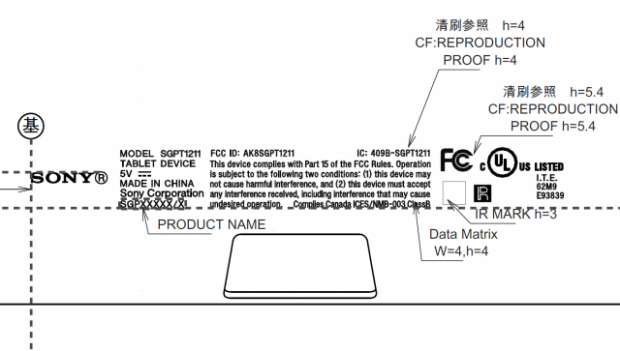 One possibility would be that Sony is looking to offer a successor to its Android Sony Tablet S model, which runs on Google’s Android platform and is Playstation Certified. The new tablet would help Sony remain competitive in the Android slate market against newer offerings with more recent specs such as dual-core Snapdragon S4 or quad-core Tegra 3 processing power.

Another potential would be that Sony is readying its own entry into the Windows tablet market with the launch of Microsoft’s Windows 8 operating system coming later this Fall in October. The SGPT1211 could potentially be hardware that powers either Windows 8 (if it’s based on an x86 processor architecture) or Windows RT if Sony decides to equip its hardware with chipsets based on ARM designs.

One thing is for certain from Sony’s FCC filing–according to the label, it appears that this tablet will be made in China.