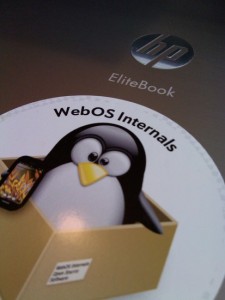 HP’s webOS Developer Relations team member Josh Marinacci posted a great sample photo taken with the Pre 3’s camera of an EliteBook laptop showing webOS stickers and the shot illustrates several points. First, the camera is an auto-focus camera with the ability to take close-up macro shots. This is definitely different from the recently released Nokia C7, the Nokia Astound, and the Nokia E7, all of which come with an extended depth of field camera–All About Symbian has a great post explaining the benefits and drawbacks of EDoF cameras. The second thing is that the picture isn’t focused at the center, which may suggest that HP may have either attempted to include a tap to focus feature, similar to the iPhone where a user can tap a certain area on the screen, or camera’s viewfinder, to focus on that particular area, or the company has developed intelligent algorithms for the camera for focusing.