Windows 10 Upgrade Guide: What You Need to Know

For months, Microsoft has teased users about what it has in store for them when Windows 10 rolls out. That being said, only this week did we get a clear picture of everything Windows 10 will mean for users. Apps will work across Windows 10 on phones, tablets and notebooks and desktops. Windows 10 also includes an adaptive interface that changes depending on whether touch or a mouse and keyboard or touch is being used. There’s plenty more to entice users of every kind.

At this point, the biggest question on user’s minds isn’t whether Windows 10 will address the issues they have with Windows – Microsoft has stuffed tons of fixes into this upgrade. The question is how and if users will be able to upgrade to Windows 10 when it becomes available. Windows 10 might be a better operating system that’s easier to use for some, but upgrading is still as nuanced as it has ever been. Microsoft has confirmed that anyone running Windows 7 and Windows 8.1 will get the upgrade free in final form. Here’s what we know about the upgrade process already.

Upgrading from Windows 8.1 to Windows 10

By all accounts, it’ll be the easiest thing in the world for Windows 8.1 users to upgrade to Windows 10 when it becomes available. Microsoft hasn’t said how the final upgrade will work exactly, but we can extrapolate.

Windows 8.1 was the first time Microsoft rolled out a large update through a method other than Windows Update. Overtime, Microsoft required anyone who wanted to continue getting updates to upgrade to Windows 8.1 through Windows Update eventually, but for the first couple of months users needed to go into the Windows Store and download Windows 8. 1 manually. Presumably, that’ll be how users upgrade from Windows 8.1 to the final version of Windows 10.

Today, Windows 8.1 users can upgrade to Windows 10 through the Windows Insider Program. That involves signing up for the program, downloading and installation file, copying that installation file to a disc or USB flash drive and getting through the set up process. Windows 8.1 devices can be upgraded to Windows 10 without a fresh install, meaning users get to keep their programs installed.

Windows 8.1 and Windows 10 have virtually identical system requirements. As such, compatibility shouldn’t be a problem.

Upgrading from Windows 8 to Windows 10 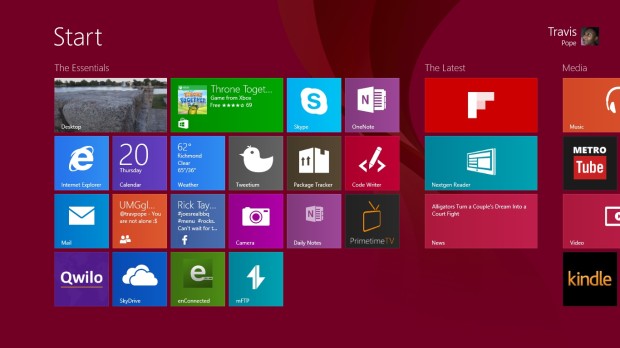 Again, Windows 8.1 and Windows 10 have similar hardware requirements. If your PC is running either, than you’re in the clear as far as upgrades are concerned.

Upgrading from Windows 7 to Windows 10

Windows 7 is where upgrading to Windows 10 gets very, very interesting. Strictly speaking, Windows 10 is the most direct upgrade for anyone still using Windows 7. The Desktop interface that dominated previous versions of Windows is back in all of its glory. Microsoft has upgraded the Desktop with a new design, apps from the Windows Store and some new Snap suggestions for better multitasking. If you liked Windows 7, you should like Windows 10.

Once again, the upgrade path and system requirements are the same. Windows 7 users are able to upgrade directly to Windows 10. That means they won’t be required to install all of their programs again. Hardware compatibility should be fine, provided a device isn’t running Windows 7 Starter Edition. That’s where system requirements get dicey.

Upgrading from Windows Vista to Windows 10

The trouble is that Windows Vista isn’t a supported operating system any longer. Upgrading to Windows 10 will require Windows Vista users to do what’s called a fresh install. In short, expect to install every app to your device again after the update. It doesn’t appear as if this will change for the final version of Windows 10 coming later this year.

Read: Windows 10: 3 Things to Back Up Before the Preview

Good luck updating your Windows device to Windows 10. Remember, what you’re getting is a test of the final version. Back up your data and make sure that you’ve backed up your operating system before you upgrade.