Unlike emulator solutions we have seen in the past for various platforms that allow Android apps to run, WindowsAndroid is a software development effort that allows Windows owners to run Google’s Android OS on their machines natively, which means apps should run at full speed and not suffer any slow downs. This isn’t a dual-boot solution and WindowsAndroid runs as a program inside your Windows desktop. From there, you can launch an Android app while still having access to Windows programs, like Microsoft Word or Excel.

The way this works is that WindowsAndroid uses a Windows kernel to run rather than a Linux kernel. Google apps–such as Gmail–would run fine, but requires a separate flash to load those apps.

Right now, WindowsAndroid works on Android 4.0.3. Development is still being done to port newer versions of Android. As of right now, that means no Google Now access, which requires Android 4.1 or later. 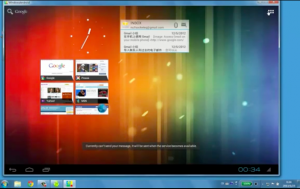 The fascinating thing about WindowsAndroid is not the technical backing that allows Android to run natively on Windows, but the fact that this could be one of the most compelling pieces of software for Windows RT and Windows 8 that opens Microsoft’s platform to a host of apps.

With many early reviewers complaining about the dearth of apps available for the Surface RT tablet that runs Windows RT, and that many Windows apps have not been updated for touch-enabled Windows 8, WindowsAndroid will allow Microsoft’s ecosystem to add a host of apps available on Android as an interim before Microsoft and developers release more apps to Microsoft’s Windows Marketplace. This software could become a staple for the Surface RT as it allows users to have access to Office RT for free and also to a number of Android apps.

With the elegant design of the Surface RT tablet and the attachable magnetic keyboard, can WindowsAndroid make the Surface RT a powerful Android tablet with access to Microsoft Office?

You can read more about WindowsAndroid on Android Police. In the interim, you can download the beta of the software and grab a couple of Google’s apps to flash as well if you’re so inclined to test out the solution.