Witness Eric Schmidt’s CES 2012 talk at CNet’s The Next Big Thing. In talking about the future he was asked a question by host Molly Wood about Android fragmentation. Sounding almost like a politician, he countered that it wasn’t “fragmentation” but instead “differentiation.” 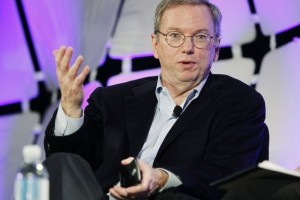 Now sometimes the meaning of words can float all over the place without context, so Schmidt clarified his statement by saying that the way Google is making Android available allows OEMs (and carriers) to do their own thing and that this in the end is good for customers. I agree and disagree.

I agree because choice and competition is what drives any marketplace. I disagree because, well, we continue to see a problem with carriers that slow down updates, and even though Schmidt wants us to believe that the future of Android and its App marketplace means that those Apps will run on any of these devices, this just isn’t realistically the case.

Take for example the news that the popular iOS App, Snapseed, is coming to Android. That’s great news, if you have a Tegra Tablet, because it won’t be supported on non-Tegra devices. Certainly you can argue that as mobile OS software on any platform advances there’s going to be some Apps left behind.

And Schmidt says Google’s goal is to see Ice Cream Sandwich spread across as many devices as possible. CES 2012 as already shown us some interesting looks at that and we’ll see more as other announcements roll out throughout the year. But Schmidt and Google’s goal is dependent on their partners, and unless there’s profit to be made by updating older devices, I think it is a fair assumption to make that we won’t be seeing a ready push to get ICS on existing devices as a chief priority when there are new devices to push into the marketplace.

I admire Schmidt by tackling one of the perception problems Google has with Android. Frankly, it might be too little too late as Google should have addressed this much sooner, and I’m afraid the language labels are going to stick.

As an example from another sphere of human endeavor, as the Republican primary contest roll on, I’m noticing that the attacks on Mitt Romney for his experiences with Bain Capital are making others in his party nervous. Nervous enough to prompt Republican wordsmiths to counsel others to back off of using the word “capitalism” in favor of “free enterprise”. The thinking here is that the world capitalism isn’t too popular these days. The politicians play this game all the time. Schmidt is trying to do the same here. Word games do matter, but, in my humble opinion, when we try to wordsmith (or spin) our way out of a weakness and turn it into a strength, we run the risk of being disingenuous. Some times that matters. Some times it does not.