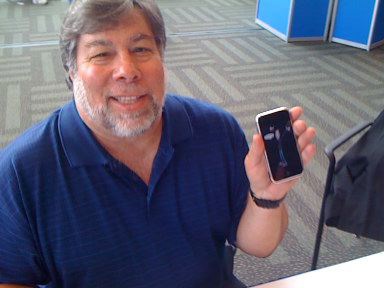 So, Steve Wozniak says that Android will eventually be the winner instead of Apple’s iOS. I think it is time to stop pretending like there is still a race when it comes to Google’s Android vs Apple’s iOS handset wars. Not just because of Steve Wozniak’s words, but because it was obvious, even before Android took off, that Google’s Microsoft-like approach was going to afford the opportunity to get Android on far more handsets than Apple. The same will be true of Tablets.

In fact, the only news here would be if the opposite proves to be true and Apple outpaces Google in these sectors. Microsoft could upset that apple cart, but at the moment that doesn’t appear to be the case, although it is still very early in the life of WP7.

Sure the race is still being run, but the numbers just don’t add up any other way. I would suggest that they never have if you look beyond the last quarter’s statistics and into tomorrow. The funny thing about races like this. There is no finish line. That actually makes the handicapping a moment to moment thing. In the long run, I don’t think Apple cares. Apple makes enough profit doing what it is doing and seems content to do so in the same way it has always been in other sectors.

The good news for all the players (and consumers) is that the market has expanded and there is plenty of room for those in the game to grab some share. And what’s that old maxim about competition? Yeah, it’s a good thing. But in a world and a culture that always demands a winner, I’m guessing the short-sighted non-stories will continue.

UPDATE: Wozniak is now saying he was misquoted. Further he says that every App he runs runs better on his iPhone and that he expects Android to become a lot like Windows in his proliferation. I think my larger point still holds though.