This Sunday WWE will hold WrestleMania 29 in MetLife Stadium in New Jersey and smartphone users can stream the event to their phones if they’re willing to pay the price.

The WWE app for iOS and Android will let wrestling fans watch the entire wrestling event from Undertaker vs CM Punk and HHH vs Brock Lesnar to The Rock vs John Cena for the WWE Championship on their iPhone, iPad or Android phone. To get access to the show, however, users will have to pay the pay-per-view price. Just to watch WrestleMania 29 will cost $59.99.

The good news if that $59.99 will let users rewatch the “Showcase of The Immortals” for a few weeks after Sunday, April 7. After that, however, the stream will be unavailable to watch without paying about $20 to watch it from the archive. 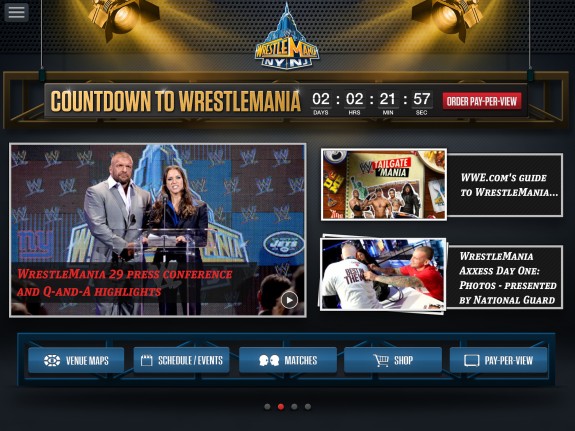 The app is a great way for users who don’t have cable to watch the show, especially iPhone or iPad users who have an Apple TV. The app supports AirPlay so users can watch the show on the HDTV through the Apple TV.

Users without an Apple TV also have the option to watch the show through the Xbox 360 or through a Samsung SmartTV app. WWE also offers a Windows 8 app.

Aside from streaming the app, the WWE app will also feature content alongside WrestleMania 29. The app is one of the few places to watch the pre-show where former Real World star The Miz will face Wade Barrett for the Intercontinental Championship.

During the show the WWE app will have tweets from wrestlers involved in the show, photos from the event and some backstage video footage and interviews. It can help make the downtime between matches a bit more interesting when the company typically airs video packages explaining why they booked the next match.

The WWE app is free to download, users only have to pay for it if they want to watch WrestleMania 29 through the app.