At CES 2013 today, Sony finally debuted the oft-rumored Sony Yuga and Sony Odin smartphones, revealing them to be the Sony Xperia Z and the Sony Xperia ZL respectively. Both new Xperia devices will be Sony’s answer to Apple’s iPhone 5 as well as the rumored Samsung Galaxy S4, Samsung’s new Galaxy smartphone that is rumored to be arriving in the first quarter of this year.

In the build up to CES 2013, the Sony Yuga, a 5-inch phablet, leaked out numerous times, displaying its specs and design for the world to see. The device that was announced today is exactly what we expected to be, featuring a 5-inch 1080p HD Reality Display (1920 x 1080), 2GB of RAM, a 13.1MP rear camera, 2.2MP front-facing camera, 4G LTE data speeds, and a 1.5 GHz Snapdragon S4 Pro quad-core processor. 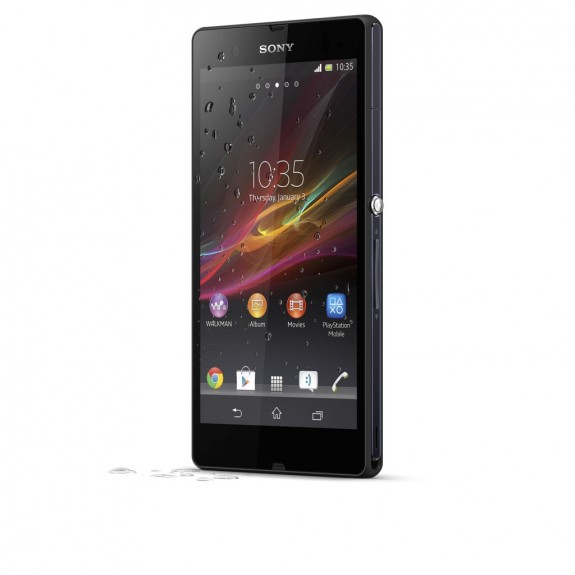 The Sony Xperia Z will arrive in Q1 of 2013 to take on the iPhone 5 and Samsung Galaxy S4.

The Xperia Z comes with 16GB of on-board storage space with a microSD card slot that comes with support for a 32GB microSD card, a suitable 2,330 mAh battery, and a slim 7.9mm design that is resistant to both water or dust. The Xpeira Z weighs 146g which is actually much lighter than some of its competitors such as the Galaxy Note 2 which is around 180g in weight. Sony will offer it in three colors black, white, and purple.

The device will also run a Sony user interface that the company says is much less than its other software offerings and won’t dominate the experience like it has in the past. Sony did not give the the user interface a name.

Sony also will offer another version of the Xperia Z in the Xperia ZL which was previously known as “Odin.” The Odin is essentially the same phone but it employs a curved back plate. It isn’t, however, water resistant like the Xperia Z.

The company did not specify specific carriers or a release date but says that the phones will be launching globally to take on the iPhone 5 and presumably the Samsung Galaxy S4, rumored to be coming in February, at some point in the first quarter of 2013.