ZAGG, the maker of the Invisible Shield, is teasing a thinner and lighter backlit keyboard case that will be compatible with Apple’s rumored iPad 5 tablet. Though Apple has not announced the iPad 5 yet, the iOS-maker has announced an event later this month on October 22, a date that’s believed by many tech writers to debut Apple’s fifth generation tablet.

According to leaks, the iPad 5 will come with slimmed down bezels and a design style that will closely resemble the design that Apple introduced on the smaller iPad mini. And though the overall footprint of the iPad will shrink from the iPad 4 to the iPad 5, Apple’s forthcoming full-sized tablet will still retain a 9.7-inch Retina Display according to early leaks.

According to 9to5 Mac, ZAGG is asking consumers to sign up with their email addresses to be notified when the keyboard accessory will become available for purchase. 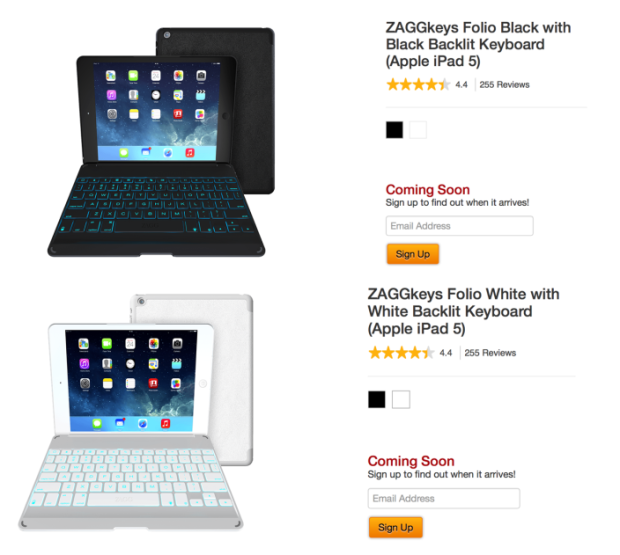 The only downside with using the case is that the hinge may hinder the usability of calling up the Control Center panel as a gesture from the bottom to the top is needed to bring up that menu. With the hinge obscuring the area to produce that gesture, it will be hard to call up Control Center.

That said, in the past the ZAGG keyboards have received high review marks on GottaBeMobile and we anticipate the Folio Keyboard for the iPad 5 to perform equally as well.