While many tablets today are more known for their ability to consume content, Zagg is helping to change our perception of touchscreen-only slates to productivity devices thanks to the company’s ingeniously designed keyboards that are specifically made to complement a wide range devices. And the ZAGGkeys Mini 7 extends Zagg’s leadership in crafting well-made keyboard cases that enhance the utility of our tablets, and in this case specifically, the recently unveiled iPad mini with its 7.9-inch display. Though the ZAGGkeys Mini 7 keyboard lacks the backlit keys of the larger ZAGGkeys Pro Plus model that’s designed for the larger iPad 2 and iPad with Retina Display, the Mini 7 offers a great typing experience with great tactile feedback along with protection for the iPad mini. 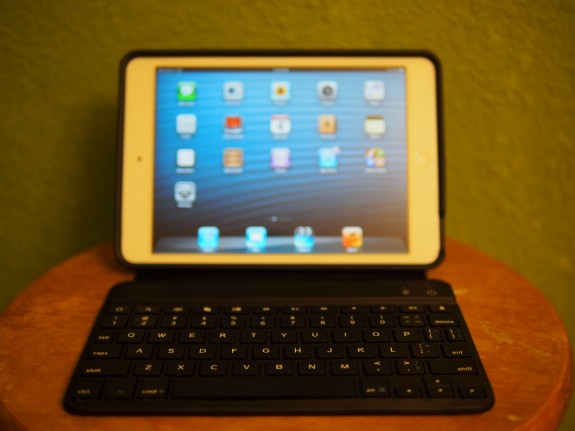 The ZAGGkeys Mini 7 is both a case for the tablet as well as a Bluetooth keyboard. The outer material of the case feels like a grippy moleskin cover that’s soft to the touch. The synthetic material adds a nice amount of grip, but over time I suspect that the material will attract dirt and dust, which may be hard to wipe down because wiping the cover with anything that can leave lint will leave even more debris on the cover, a catch 22. 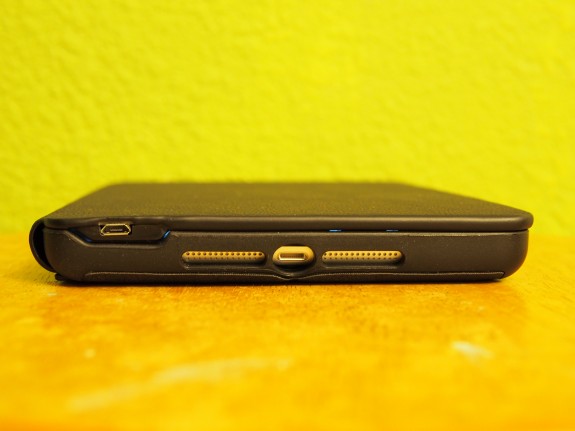 In closed position, the keyboard position folds over the iPad mini’s display and serves as a screen cover. Unfortunately, it’s not a smart cover, and you’ll still need to manually turn on your iPad when you lift off the cover.

When closed, the the ZAGGkeys Mini 7 will protect the screen and sides of the iPad. One thing to note is that in closed position–see image above, there is nothing really to latch keyboard portion securely to the iPad mini portion to keep both portions shut. This may matter if you drop the iPad mini in the ZAGGkeys Mini 7 case as the screen and keyboard portion may separate and expose the screen upon impact. One potential suggestion to Zagg for a future model would be to create a strap that secures both halves in place, similar to the elastic band found on Moleskin notebooks. 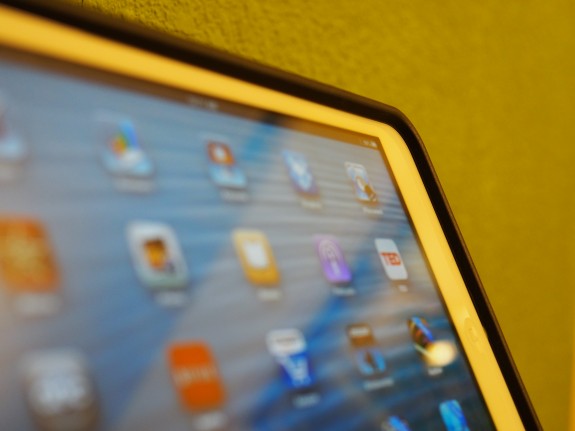 Protruding lip helps cushion the screen upon impact if you drop the iPad mini on a flat surface screen-side down.

Regardless, as the iPad portion of the case protrudes up taller than the screen forming a lip around the display, the screen will be relatively protected if it falls flat and opened facing a flat floor. If you drop the iPad mini in the case with the screen open onto protruding gravel, then that’s an entirely different story. 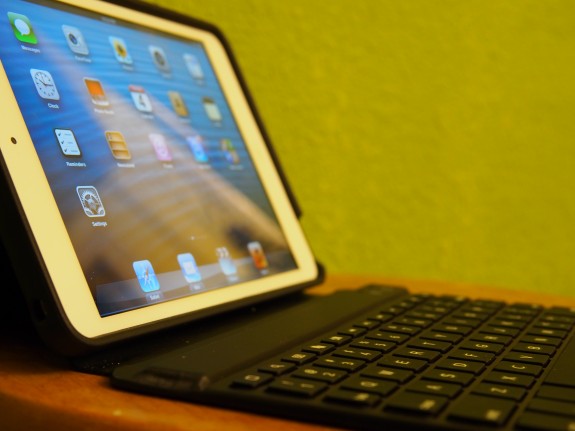 You can see the lip that extends out and above the screen to cushion the screen if the device falls with the keyboard portion open. The lip also holds the iPad mini into the case portion.

As the case offers protection to the iPad mini itself, you’ll find that the package adds a bit of thickness and weight (it has to accommodate the keyboard with mechanical keys as well as battery to power the Bluetooth radio) and the whole package measures in at around 1 1/4-inch thick when closed. 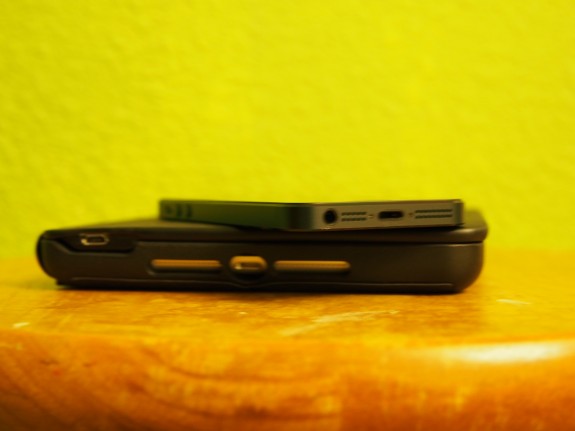 Thickness of the closed package compared to an iPhone 5.

There are cleverly cut out openings to make it easy for the dual speakers to be amplified, the Lightning cable to be connected, as well as for camera access. 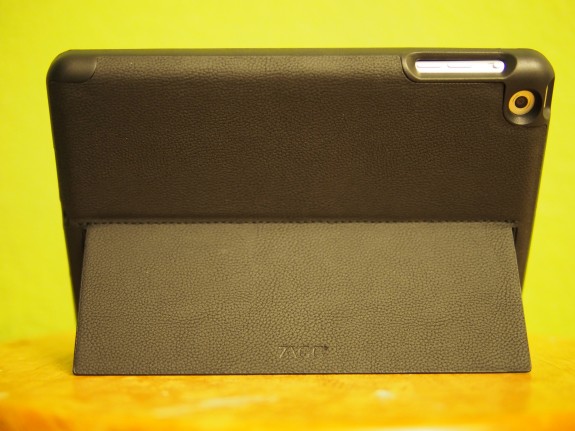 Cutouts for ports and buttons.

The areas around the power button, mute/screen rotation lock keys, and volume buttons are also cut out as well to give access. 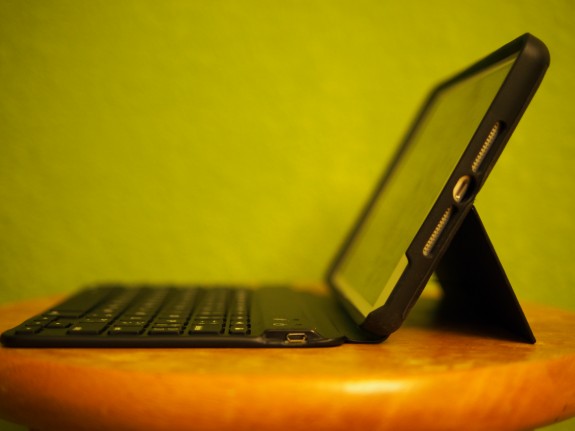 Micro USB charge port on the right hand side of the keyboard. It’s located on a thick part that houses the battery as well.

And on the edge that houses the iPad mini’s Lightning connector, on the keyboarded flap, you’ll see a slightly thicker portion that houses a micro USB charge port to charge the keyboard’s battery. As the keyboard connects to the iPad mini via Bluetooth, some power is required and Zagg claims a single charge will last for months. 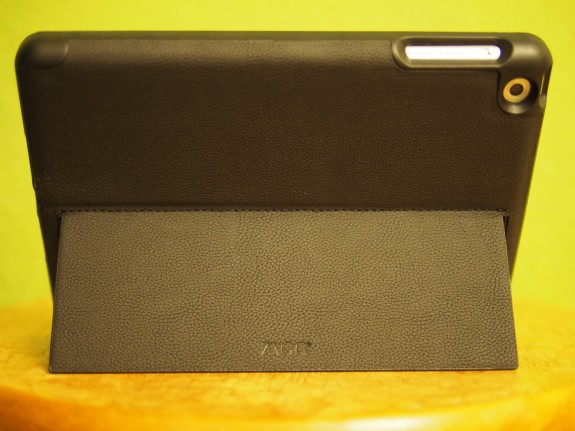 When opened, the keyboard and the iPad mini are intended to be used in landscape mode, similar in concept to what Microsoft had envisioned for the Surface tablets. In fact, there’s a clever flip-out stand on the back portion that houses the iPad mini. 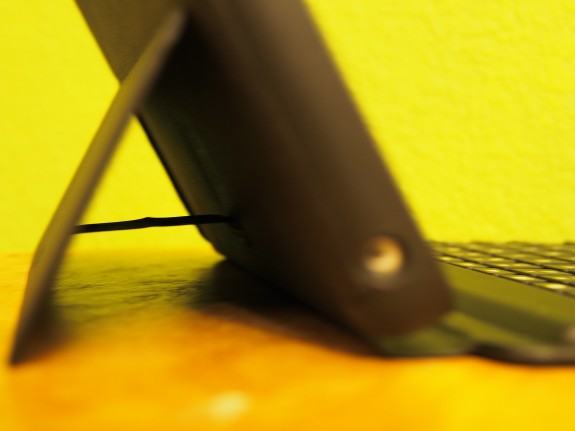 Ribbon and tension hold the flip-out stand in place.

The stand itself is held by tension with a ribbon, and when you prop up the iPad mini on a flat surface, the weight of the tablet side along with gravity fully extends the ribbon and gives you a viewing angle of roughly 130-140 degrees. It’s not bad, but you’re not able to adjust the viewing angle if you want to tilt the screen further. Tilting the screen more upright may cause it to collapse onto the keyboard portion and close.

Additionally, by nature of this design, the ZAGGkeys Mini 7 must be used on a flat or relatively flat surface, like a tabletop, to be efficient. Else, if you’re using it on a bed, the rear flip-out stand may collapse and either make the screen fall down flat or close the screen onto the keyboard portion. 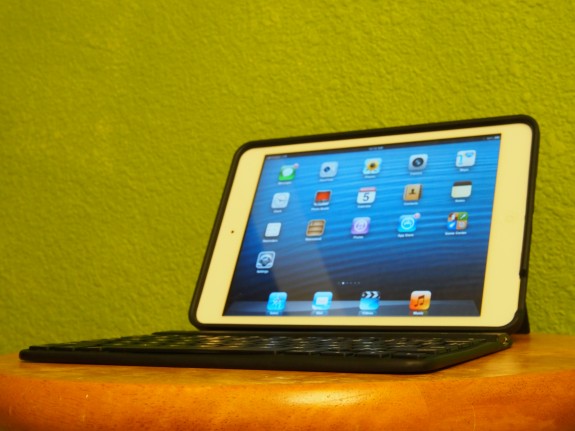 Thickness of the keyboard portion

This form factor is similar to the Surface with the Type cover and the the keyboard portion is really rather slim considering it does have mechanical keys similar to those on a laptop, and not cheap membrane-style keys like on foldable or rollable rubber keyboards on the market. 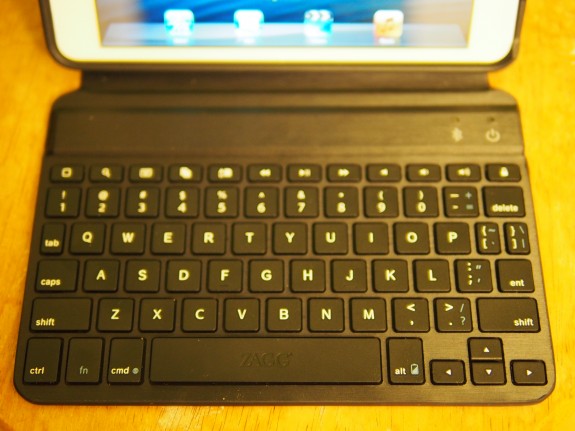 Raised, island-style keys and not the cheap membrane keys. These keys are 13% smaller than a traditional keyboard and offer great tactile response. Superb experience even with the smaller key size.

The keyboard itself has keys that are island style and is roughly 13 percent smaller than the keys of a traditional Apple keyboard. 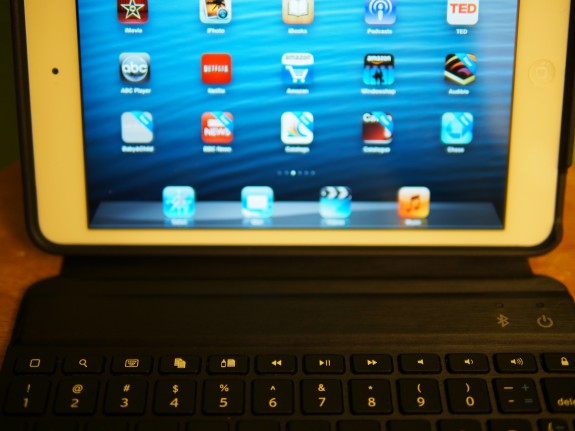 There are special function keys as well, such as those for copy and paste as well as going home and searching the iPad using the Spotlight search feature. Holding down on the home key on the keyboard–so you don’t have to reach up onto the iPad mini, will evoke Siri. Additionally, there are keys for music control, volume adjustments, and locking the tablet–turning off the display.

The ZAGGkeys Mini 7 connects to the iPad mini via Bluetooth. There are two membrane keys at the top right edge of the keyboard for the power and Bluetooth keys. You’ll need to first charge the battery. Once you’ve charged up the battery, press and hold the power button for a few seconds until it glows. Then, do the same with the Bluetooth membrane button and then you can turn on Bluetooth on the iPad mini and pair the two devices. 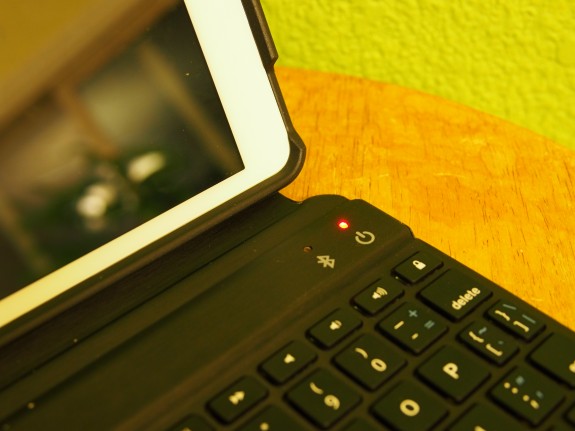 Bluetooth and power buttons and indicator lights. The buttons are membrane buttons–just push where the logos for these buttons are imprinted and you’re good. Hold for a second or two.

Afterwards, open up your favorite word processing app or browser and begin typing. In my experience, there was no lag between the typing on the keyboard and letters appearing on my tablet’s screen. It feels natural. 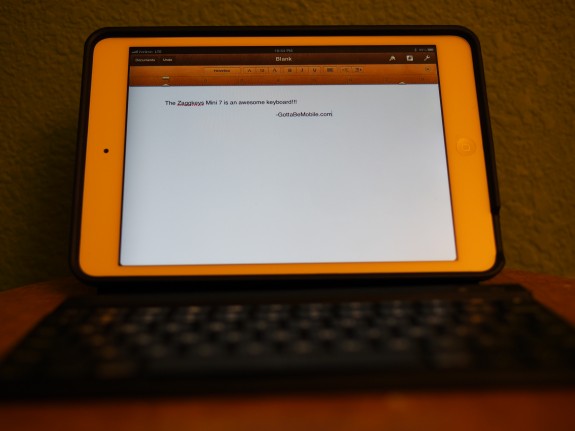 With the smaller screen of the iPad mini, typing was not as comfortable as it was on a full-size iPad, and add to the fact that typing on a touchscreen with no tactile feedback is never really gratifying to begin with, Zagg created a perfect complement to the iPad mini. The company has perfected the mobile keyboard, and the ZAGGkeys Mini 7 shows thoughtful attention to usability in crafting a great design while ensuring maximum usability.

The keyboard, with keys that are 13% smaller than traditional keyboard keys, is a bit cramped, but that’s not really Zagg’s fault as creating a larger keyboard would mean that the whole case wouldn’t be fitted specific to the size of the iPad mini’s 7.9-inch display. 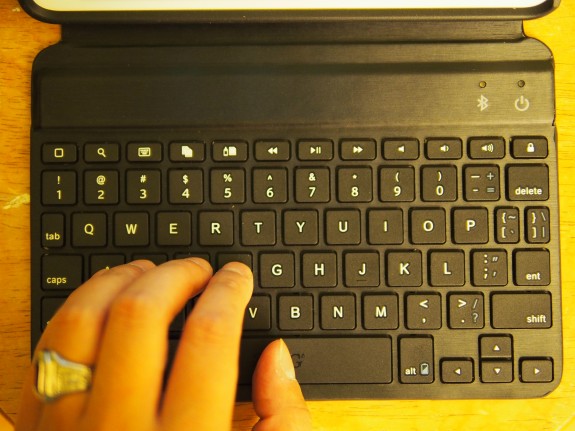 Over time, I did get accustomed to the smaller keys, and in typing, I noticed that I used about 3-4 fingers on each hand rather than perform full 10-key touch-typing. It’s not a big deal, and it does beat typing on the cold glass of the iPad mini.

The keys do offer nice tactile response, and being that it’s a keyboard over a flat surface, the keyboard itself doesn’t flex, unlike on some keyboards found on more budget-oriented keyboards notebooks and ultrabooks.

Still missing from the keyboard is a trackpad, similar to the keyboard dock on the Asus Transformer Pad series. However, I think this is more the fault of iOS not supporting a mouse input natively. It’d be interesting to see if Apple and Zagg or other developers could leverage this design, and perhaps use an app on the iPhone to turn the smartphone into a trackpad for the iPad mini via a Bluetooth connection. That would create an elegant solution for iPhone- and iPad mini-wielding consumers. 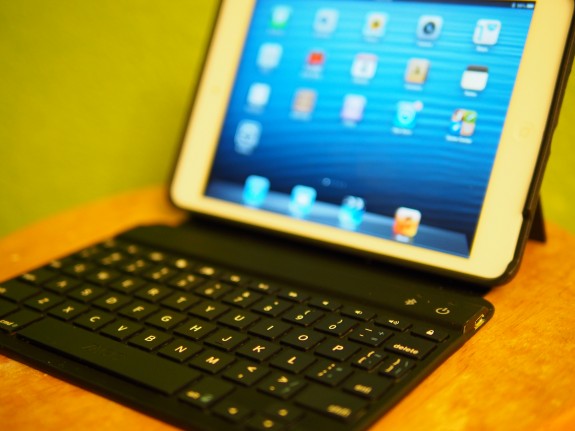 No trackpad. You’ll still need to switch between the iPad mini’s touchscreen and the keyboard a lot, depending on what you’re trying to do.

And unlike the ZAGGkeys Pro Plus, there is no backlighting for the keys. It’s not a big deal, but those who type in the dark may need to adjust more on this design as the keys are smaller and require some re-training. 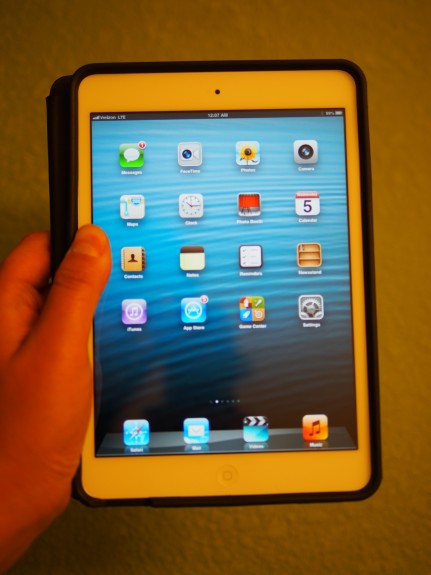 Holding the cased iPad mini with keyboard portion wrapped around back like a folded-over magazine.

And I am worried that as the iPad mini is secured to the case itself via a lip that extends slightly over the display, removing and replacing the iPad mini too often may stretch out the lip so that it no longer securely holds the iPad mini into position. 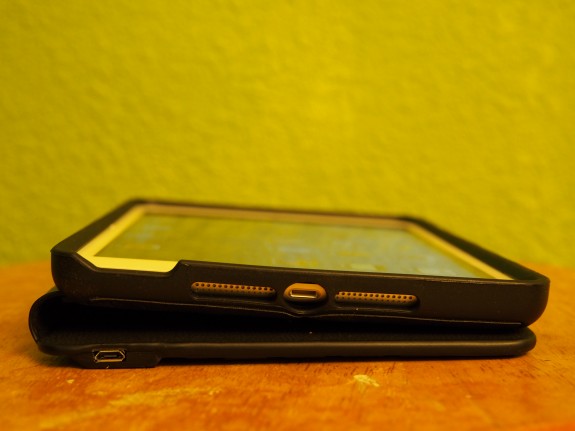 With the keyboard portion wrapped around to the backside–think Lenovo IdeaPad Yoga–you can hold the iPad mini in this folded-over magazine style orientation, though the entire package adds weight that may make it uncomfortable to hold for longer durations.

It’s a minor quibble, but still a worthwhile one for those who may prefer to jump between different form factors–slate and keyboard clamshell. On the Microsoft Surface, for example, you can quickly snap off the keyboard portion and on ZAGGkeys Pro Plus for the larger iPad, you just lift the iPad out of its dedicated stand and that design offers more versatility. While this type of keyboarded folio case is elegant and affords more protection to the tablet, I wish Zagg also offered a non-folio design that’s more minimalistic and offers more versatility to users.

For those with Surface-envy, at $90 through Zagg the ZAGGkeys Mini 7 is an excellent investment for those who are looking to be more productive on the go and are looking for little bulk. The ZAGGkeys Mini 7 is a multifunctional tool that is 100 percent keyboard, a great kickstand, and a durable case for your tablet, and the accessory does everything superbly in an elegant package. And considering that this keyboard case is made by the same people who makes the virtually indestructible Invisible Shield, you’ll know your tablet will be well-protected.

And as to the faults that we found with the ZAGGkeys Mini 7, those weren’t really anything on Zagg’s part, but rather due to restrictions of Apple, such as the issue with no trackpad. 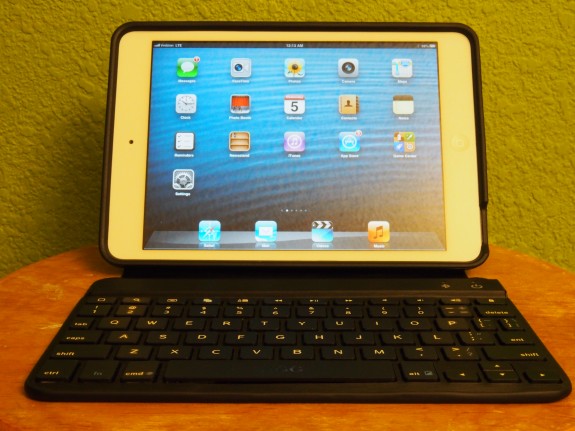