Zinio Brings Magazines to the Small Screen on Android 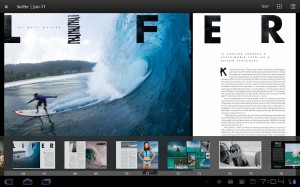 The app, which is a free download from Android Market, will work on any Android 2.2 or Android 2.3 Gingerbread smartphone, so it should be compatible with the bulk of Android phones on the market today. Users will have to pay for the content itself, however, and Zinio will give users the option to either subscribe to specific magazines or purchase individual issues a la carte.

With magazines on smartphones, perhaps this is another reason to consider phones with larger screens, such as those with a 4- or 4.3-inch display, such as the 4-inch Droid 3 or the 4.3-inch HTC Thunderbolt. However, even with larger screen sizes, users are still stuck between choosing either a high resolution qHD display–such as the HTC Sensation or the Sprint HTC EVO 3D–or a screen that lends itself to better displaying a magazine’s page by way of the aspect ratio, like tradional WVGA screens.

That means, users will either need to choose either a 16:9 aspect ratio display with highly packed pixels, as those on the HTC EVO 3D, that doesn’t lend well to displaying a magazine’s page by virtue of the narrower aspect ratio, or they’ll have to select a WVGA display, like that on the HTC Thunderbolt, that’s better at rendering a magazine’s display because of a less elongated display, but without the high qHD resolution.

To make it easier to read magazines on a smaller phone experience, Zinio is giving users several view options. The first view is a traditional magazine page layout, and there’s a second phone optimized view that displays the text for better viewing.

Publishers can also embed videos, audio, and additional graphics into their publications as well to enhance the digital experience with magazines.