At Mobile World Congress, Chinese smartphone-maker ZTE took the opportunity to introduce a new premium high-end flagship phone in the form of the Era, a quad-core device that will, unlike Huawei’s offering, utilize NVIDIA’s Tegra 3 processor. The Android 4.0 Ice Cream Sandwich-powered Era will also support 4G LTE networks, and ZTE commits to bringing the Era to China and Europe in Q2 2012.

The device features a 4.3-inch qHD resolution display. In addition to 4G LTE network support, the Era will also be able to support HSPA+ connectivity thanks to NVIDIA’s Icera modem, and will come with a memory card, 8 GB of on-board storage, NFC, DLNA and Dolby sound. The quad-core CPU is clocked at 1.3 GHz. 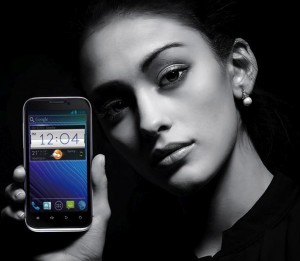 ZTE is hoping that its entry into the high-end space will help it grow its market share, and the company has ambitious plans to be the number three smartphone manufacturer by 2015.

Based on the NVIDIA® Tegra® 3 quad-core mobile processor and equipped with a NVIDIA Icera 450 HSPA+ modem, the ZTE Era packs high definition multimediacapabilities into a package that is just 7.8mm thick.

The ZTE Era is the flagship device launch from ZTE at Mobile World Congress and is part of a series of eight new devices unveiled at the event, all delivering significant advances in power, high definition multimedia capabilities and design. Based on technology innovations including quad-core chipsets, LTE and the latest Android and Windows Phone platforms, the new devices form a core component of ZTE’s ambition to become a top three handsetprovider by 2015.

“The numbers speak for themselves. With 50 percent growth in handset shipments and 400 percent growth in smartphone shipments, we are confident that we are entering a new era in the mobile terminal market. The ZTE Era captures the excitement we feel about the future and brings it to life in a fantastic new device,” said Mr. He Shiyou, Executive Vice President and Head of the Terminals Division at ZTE.

According to industry analyst Gartner, ZTE was ranked the world’s No.4 in terms ofhandset shipments in Q4 2011 and ZTE smartphone sales are growing faster than any other vendor except Apple.

“In 2012, ZTE products will be building up from the low-middle end of the market into the middle-high end, with the ZTE Era being the best example of that development,” Mr. He Shiyou said. “We will continue our long-standing cooperation with operators around the world, but we will also continue to build our distributor channels (both ODM and OEM), and we will be focusing our marketing in particular on the high-end markets of Europe, America, Japan and China.”