At the Consumer Electronics Show this year, Chinese smartphone-maker ZTE had been busy hawking its wares, and the company has found success as it has announced that its flagship Grand S smartphone will be headed to North American carriers. ZTE says that it has received strong interest from U.S. carriers, and despite optimism on the carrier side, it’s still too early to see if ZTE will succeed with consumers in the smartphone market as it has little brand recognition. 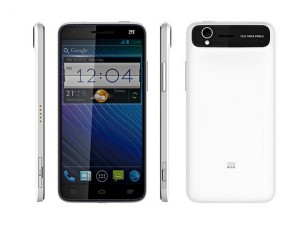 In the past, ZTE had worked with carriers to release smartphones with carrier-branding and little of its branding is seen on products. This process was similar to how HTC started, and Samsung was a relatively small player in the U.S. mobile market when it entered the space. However, HTC has shown that by building quality and relevant products, it could create its own brand and Samsung has muscled its way into the competitive market with high-end products that consumers are asking for by name, like the Galaxy S3. ZTE could potentially follow the same trajectory with aggressive marketing, strong attention to design, and creating compelling software and user experiences.

The ZTE Grand S has been a much anticipated smartphone that has been rumored even before its CES unveiling. The phone features a slim design and packs in advanced features such as a quad-core Snapdragon S4 Pro processor, 5-inch 1080p full HD resolution touchscreen display, 13-megapixel camera, 2 GB RAM, and 16 GB storage. The Grand S, theoretically, is very competitive with smartphones like the HTC Droid DNA and the Sony Xperia Z, which won our Best Smartphone of CES 2013 award.

In use, though, the Grand S felt laggy and things didn’t quite flow as well as it should for a flagship smartphone. For users who can put up with a bit of throttled performance until ZTE releases software updates to keep the phone up to speed with its best competitors, the reward would be pricing as ZTE is expected to undercut its rivals in pricing.

For carriers, this will be attractive as they would have to subsidize their phones less. For consumers on a carrier that won’t be offering subsidies in exchange for a two-year contract, like T-Mobile USA and potentially in the future also Verizon Wireless, ZTE may be an attractive option as consumers will soon be expected to pay full retail price sans subsidies on the latest handsets.

According to a report on CNET, ZTE still hasn’t confirmed which carriers the Grand S will be headed to, but the device should launch in the U.S. later this year.