It looks like Sprint is getting aggressive with its 4G LTE smartphone portfolio. After having launched the Galaxy Nexus, LG Viper, HTC EVO 4G LTE, and the Samsung Galaxy S III, the Now Network is looking to add yet another rumored device to its network. This time, however, said device will compete in the high-end segment with specs that would be competitive against the Galaxy S III and the EVO 4G LTE. The rumored device is known as the ZTE Flash. 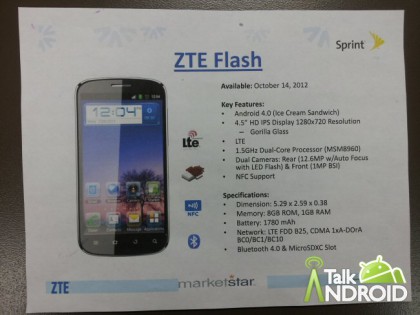 The Android operating system that the ZTE Flash will ship with out of the box is up for debate at this time. According to Talk Android, there is a possibility that Sprint may ship the phone with Android 4.1 Jelly Bean out of the door rather than the Android 4.0 Ice Cream Sandwich OS that is on the specs sheet.

The phone is anticipated to arrive in October. In terms of design aesthetics, the device looks similar to Sprint’s Galaxy Nexus and Nexus S smartphones with rounded corners. Rather than the three Android navigation buttons found on Ice Cream Sandwich, ZTE opted to go with four capacitive touch Android navigation keys placed just below the display.