If the 2017 Honda Civic Sport isn’t enough for you, the 2017 Civic Si is revving its way to your local dealer with a greater focus on driving performance. After spending a week with the Civic Sport Hatchback we were finally able to put the 2017 Civic Si to the test at Road America, during a blockbuster day of driving.

While there is a lot of interest in the 2017 Civic Type R, you can get into the 2017 Honda Civic Si at a much more affordable $23,900 starting MSRP. The Civic Si is available in a coupe or a sedan, but no hatchback.

The 2017 Civic Si runs a 1.5L turbocharged four-cylinder engine. This is the same for both the coupe and the sedan, and they deliver 205 horsepower and 192 lb.-ft of torque. The one thing you won’t find on the Civic Si is an automatic transmission. Honda only offers this performance focused Civic with a very nice six-speed manual transmission. If you’re serious about performance, you can even buy a stripped down 2017

If you’re serious about performance, you can even buy a stripped down 2017 Honda Civic Body in White and start bolting on Honda Performance Development parts. When the Honda Civic Si racing in the Pirelli World Challenge Tour Car program ran into problems, the team stripped parts off a production Civic Si driven by a Honda Canada employee who happened to be at the event.

We took the 2017 Honda Civic Si out on the track at Road America to see how this performance Civic can handle. Watch the video above to see our progress through a still somewhat damp track.

The new Civic Si benefits from the slightly longer wheelbase and lighter body, compared to the 2015 Civic Si. One of the most noticeable upgrades from the standard Civic is the suspension, which Honda tunes nearly perfectly for this car. The Civic Si handles very well and it is easy to predict where you are going as you steer. There is a small amount of understeer as you go into a corner, but as we toured the track at Road America we quickly adapted and found the Si easy to control.

Power comes fast and sustained with torque pulling you ahead from 2,100 rpm to 5,700 rpm, where a turbocharger helps deliver the total 205 horsepower. The six-speed manual transmission is incredible, allowing us to shift easily and confidently.  While you can’t opt for an automatic, you can choose between normal and sport driving modes.  In Sport mode, the suspension damping is adjusted and you’ll find slight changes to the steering and throttle response to deliver a more connected and dynamic experience.

The exhaust note is toned down a little more than we’d like, but the performance isn’t. Even packed full of sporty upgrades, the Civic Si is rated at 38 mpg highway and 28 mpg city, only a 1-2 mpg difference from the standard Civic. We’ll need to wait for a full review to share the 2017 Honda Civic Si 0-60 mph time, but it definitely felt faster than the 2017 Civic Sport Hatchback. 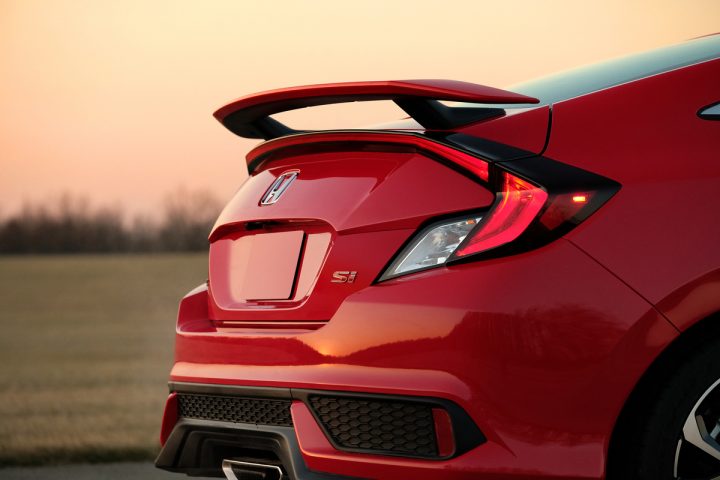 The new Civic Si design kicks off in the front with aggressive styling and keeps some of the 2017 Honda Civic Sport stylings in the rear, complemented with a decklid spoiler and a wide chrome exhaust in the center rear.

The Civic Si offers a spacious interior with Si branded seats, which are also heated, and there is red accented stitching throughout the cabin. A 7-inch touchscreen offers support for Android Auto and Apple CarPlay and all Si models include the upgraded 450 watt 10-speakers premium sound system. The Si includes dual zone climate controls standard, walk away auto lock and an electronic parking brake with hill- start assist.