The 2017 Mitsubishi Outlander GT is a very capable crossover with a comfortable ride and nearly every safety option available, but buyers need to get past the bland design and the utilitarian interior.

For the price, you will be hard pressed to find another small SUV with room for seven passengers and all the safety and driver convenience features that you could ask for. The Mitsubishi Outlander GT even includes Android Auto and Apple CarPlay support.

With Mitsubishi’s Super All-Wheel Control (All Wheel Drive) that comes on the V6 powered Outlander GT, you’re ready for a range of road conditions. 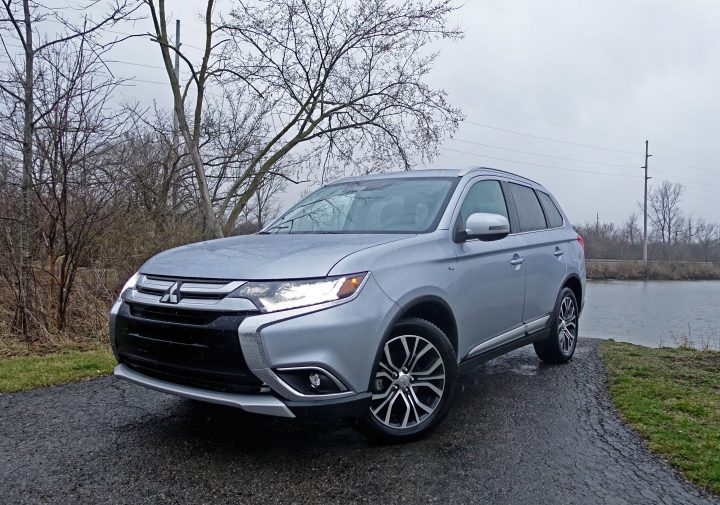 Mitsubishi offers four trim levels, including the 2017 Mitsubishi Outlander GT 3.0 S-AWC which we spent a week testing and driving. This model starts at $31,695, and the GT Touring package adds $1,500 to the price. This package includes a multitude of safety and convenience features that are worth the small bump in price. You can add similar features to the 2017 Mitsubishi Outlander SEL, but the SEL Touring package is $4,000. 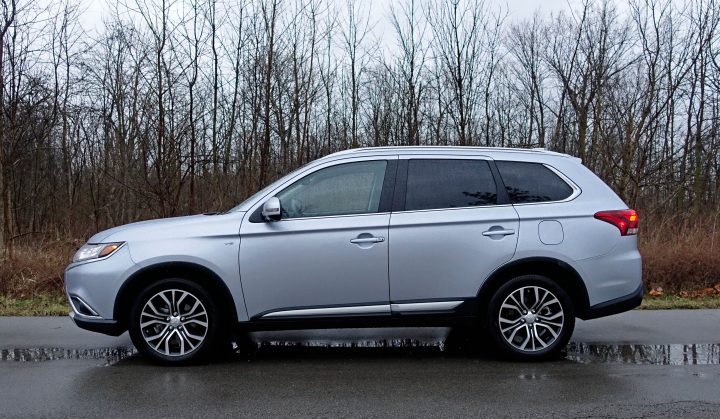 Despite a V-6 under the hood and the S-AWC that earned attention in the Evo, the Outlander GT delivers a ride more focused on comfort than quick acceleration and a thrilling driving experience. In stop and go traffic the Outlander pitches back and forth as you brake and accelerate thanks to a soft suspension. This is less than ideal, but when you get up to cruising speed the ride is buttery smooth, even on rough roads. The cabin is very quiet, though you will hear the V6 jab into the conversation if you floor it. 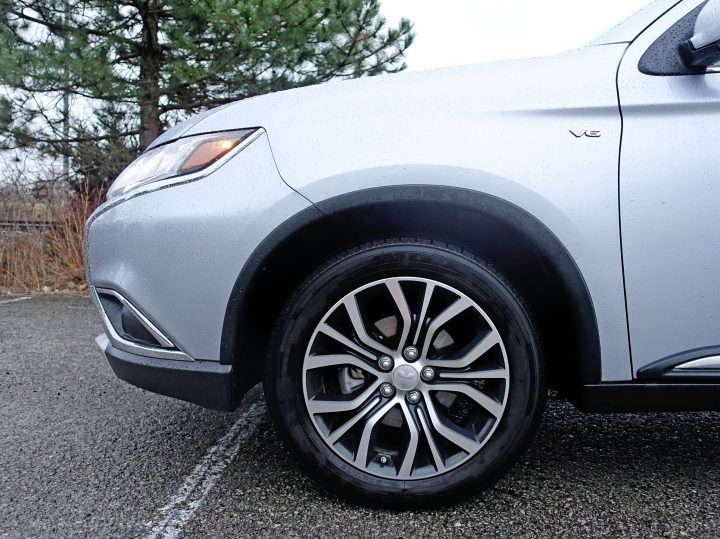 The Mitsubishi Outlander GT is reasonably fast from a stop, allowing you to quickly enter traffic or get up to speed to merge onto the highway. When you are cruising, getting the extra speed to overtake takes a while, though. In the Outlander GT, there are column-mounted shift paddles that allow you to take over shifting the six-speed transmission which does help slightly.

We achieved 22.4 miles per gallon with mixed city and highway driving, which is in line with the EPA estimate of 23 MPG. The EPA rates the Outlander GT at 20 MPG city and 27 MPG highway. 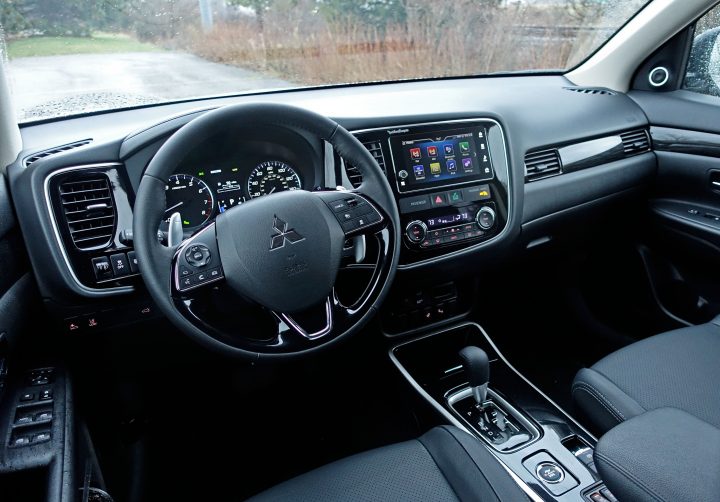 The first two rows are comfortable in the Outlander GT.

The Outlander GT design is not as eye-catching as the competition. The 2017 Outlander blends in more than it stands out, though the upgraded rims on our review vehicle helped upgrade the exterior style.

Inside, there is a lot of room for the front row and the middle row. There is a third row that folds up, taking part of the storage area. This last row seats two with minimal leg room and isn’t an option you will want to use for adults.The middle row slides forward for access to the third-row seats, but only offers a small area to climb through. 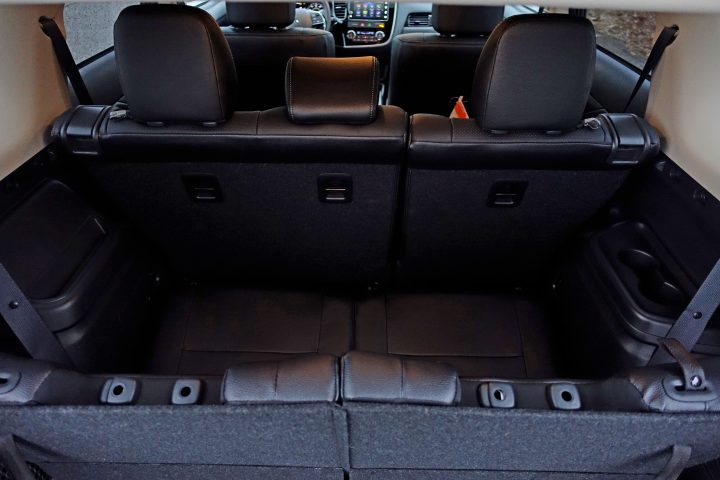 The seats are comfortable but not plush and, despite soft touch material throughout the cabin and wood grain accent, the interior is not as luxurious as you might expect. The interior design is more utilitarian than luxurious.

The Outlander GT includes power folding mirrors, a power liftgate, and a power sunroof. The GT includes heated front seats and, with the GT Touring package, you also get a heated steering wheel. 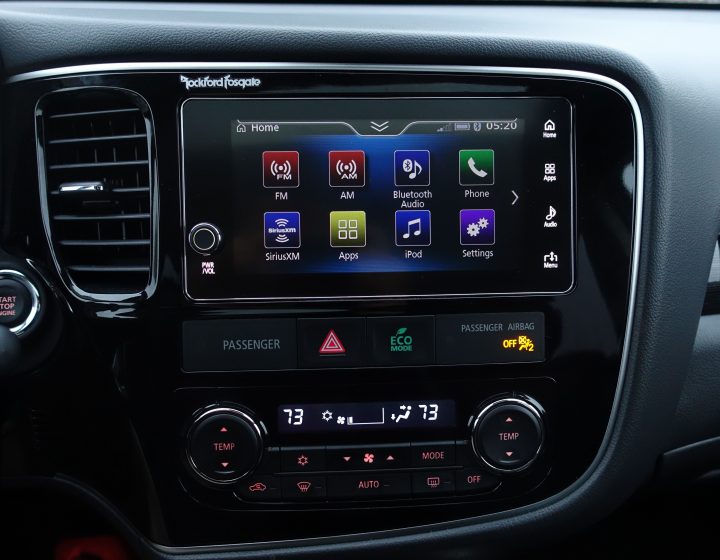 Once you get past the base trim, the Outlander comes standard with a 7-inch Touchscreen and infotainment system that supports Apple CarPlay and Android Auto, as well as standard voice control options.

The standard Mitsubishi infotainment options are certainly adequate and the touch screen responsive, but the ability to plug your phone in and use a familiar interface that includes access to Google Now, Siri and your apps is a huge feature. Another bonus is that Apple and Google update the software and features for CarPlay and Android Auto faster than carmakers do, so you’ll get more features as you own the car.

In the Outlander GT you’ll find a 9 speaker Rockford Fosgate sound system that includes a small subwoofer in the back. The sound from this system is OK, but it’s not mind-blowing. Although it’s a small issue, the volume control knob is comically small and short, making it tough to use.  Steering wheel controls help offset this for the driver. 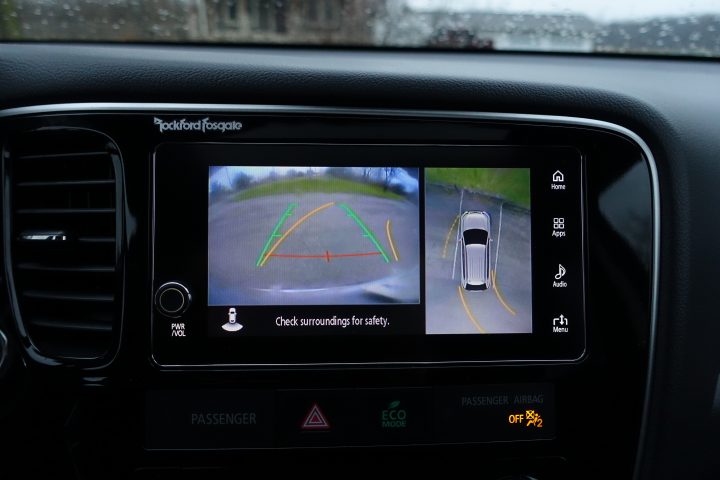 A multi-view camera system is one of the safety features we loved.

The 2017 Mitsubishi Outlander GT received a five-star overall safety rating from the NHTSA and it includes an abundance of safety features and driver convenience features that further accentuate the value of the Outlander GT with the Touring Package upgrade.

The Blind Spot Warning system makes changing lanes a breeze with an indicator when someone is in your blind spot and an alert if someone is there and you have your turn signal on. The rear cross traffic alert eases your mind when backing out of a parking spot in a crowded parking lot.

The GT Touring Package adds a multi-view camera system that includes a standard backup camera as well as a birds-eye view of your vehicle when backing up. Pressing a small button on the steering wheel switches to a front view camera paired with a birds-eye view or a close look at the front passenger side of the car.

Adaptive Cruise Control allows you to set your preferred speed and the distance between other cars that you want. Once on the car will maintain a cruising speed without the driver pressing the brakes or manually adjusting the cruise control to compensate for slower, irregular drivers.

The lane departure warning system alerts you if you start to veer into another lane with a beep and a message on the dash. Automatic high beams switch back to low beams when the car senses oncoming traffic. The Forward Collision Mitigation warns you about oncoming cars or pedestrians and can even apply the brakes.