After much speculation about Nokia bringing its large 41-megapixel PureView sensor technology from the Symbian-powered Nokia 808 to the Windows Phone platform, it looks like that may be happening sooner than later. The Finnish phone giant has been rumored in recent weeks to announce this PureView camera technology for a new Windows Phone 8 device, codenamed Nokia EOS, at Mobile World Congress and now we have confirmation from UK The Guardian news that this will be happening. Additionally, for American readers, the publication also says that the Nokia EOS will in fact be headed towards the U.S. for a summer release.

The new model will be known as EOS, and will launch in the summer in the US.

In the past, there were speculations that Nokia would deliver a scaled-down sensor and not the full 41-megapixel sensor from the Nokia 808 to a Windows Phone 8 to keep the device slim and thin. However, if The Guardian is correct, then this would not be the case and we would have a full 41-megapixel sensor, which would allow for great better color depth, good dynamic range, and also lossless zoom technology.

The lossless zoom technology is a big one for mobile phones, which have thus far mostly relied on digital zoom. Digital zoom essentially blows up the image. It’s the same if you scanned a post card and blew it up to a 50-inch poster. You’ll get grainy, pixellated images with loss of details. Scaling down to a post card, and the image looks fine. However, with 41 megapixels, you can essentially crop an image and get a 5- or 8-megapixel image and still maintain that 5- or 8-megapixel resolution. This allows you to have a small zoom and a very usable image.

And with the Nokia EOS, Nokia may be turning to yet another old handset to find inspiration. Borrowing the PureView technology from the Nokia 808, the Nokia EOS may also be turning back time to use an aluminum-clad shell from the era of the Nokia N8, one of the leading camera phones of its time. 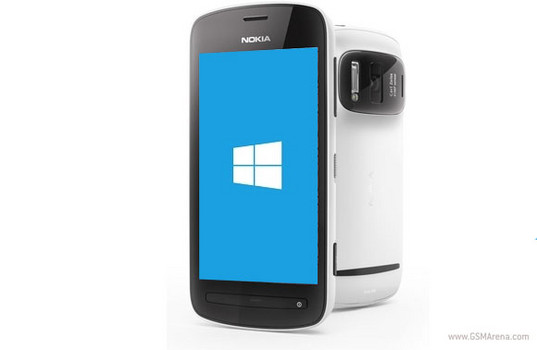 Likely, the design of the Windows Phone Lumia with 41-megapixel sensor would be slimmer than the Nokia 808, but may still come with a camera hump to accommodate the large sensor.

This PureView technology is different than the existing PureView on the current Nokia Lumia 920 Windows Phone. On the Lumia 920, PureView is confined to an 8-megapixel  sensor, but Nokia added an image stabilizer to help users create steady videos and low light photo recording. Tests conducted between the Lumia 920 and the Nokia 808 in the past suggests that the Nokia 808’s 41-megapixel camera delivers a better photo experience with more details and more natural colors.

The 41-megapixel PureView technology can also perform well under low light and reduce noise as well.

Low-light images taken at high ISO ratings (where small amounts of light are registered) typically have a lot of “noise” on them – random speckles of visible colour – caused by increasing sensitivity of the CCD sensors in the digital camera.

The aim of the 41MP sensor is to oversample the image; the actual size of pictures taken on the 808 is about 5MP, but each pixel can be determined from the information provided by the redundant pixels, thus eliminating much of the flawed data.

This is also achieved through a large sensor size, which allows each pixel to be larger to capture more light. The Nokia 808’s sensor has a size of 1/1.5-inch, which is larger than most point-and-shoot cameras on the market today; the leading Sony RX100 camera has a slightly larger 1-inch sensor.

Nokia had sent us an invitation to its Mobile World Congress press conference, which could be a likely venue for the device’s introduction.