Over the last few years, Google has made great strides in bringing a great user experience to the smartphone and to the tablet. With the debut of the Motorola Xoom almost two years ago, Google debuted Android 3.0, which for the first time brought the Android OS to the big screen officially with a new user experience. Then came Android 4.0, which began the process of marrying the tablet and smartphone experience into one, allowing Android to intelligently detect which hardware it is running and creating an experience that caters to that process. 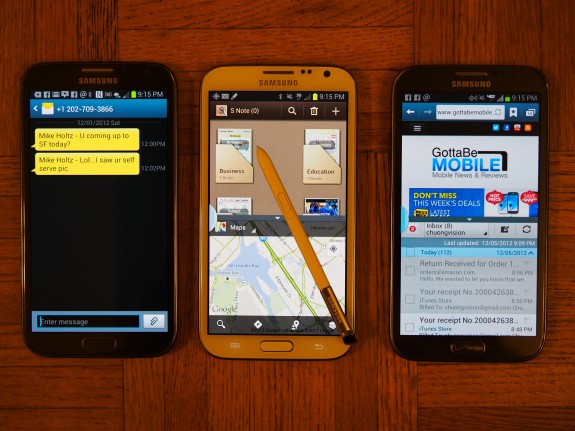 Samsung’s Galaxy Note II is helping to popularize the phablet form factor, and we need an experience that will deliver the most utility out of this hardware.

The unification of tablet and phone under Android 4.0 enabled modular devices, like Asus’ Padfone, a device for which the major processing power and OS is stored on the phone and on the phone, Android displays like you would see the OS on a Nexus 4 or Galaxy S III. Once you dock the phone to the larger tablet screen–remember, everything is powered still by the phone component and the tablet screen dock is a ‘dumb’ accessory that has no processing power or smarts behind it–you get the tablet experience like you would on a Transformer Pad or Motorola Xoom. Equal part phone and tablet, one smart phone.

However, in recent times, we’re seeing yet a third class of computing device–the phablet. This is a form factor that’s being popularized and championed by Samsung with its Galaxy Note and Galaxy Note II devices with a screen upwards of 5 inches. It’s both a phone and a tablet in one compact, mobile experience, and for the most part it works well. However, not all of that great user experience could be credited to Google as Samsung had thoughtfully crafted an experience that truly takes advantage of the larger, high resolution display. And this is something that Google will need to consider in Android 5.0–to create a truly modular OS that can span smartphone to phablet to tablet.

One of the thing that still bugs me about the Galaxy Note II is that though I can use it essentially as a tablet, with a larger display that really is just slightly smaller than a 7-inch panel, the overall Android experience is still designed as a phone. And apps that run on the Galaxy Note II are smartphone apps, not tablet apps. You don’t get the multi-pane views and you’re left with a blown up screen. For the most part, in my use, that works out well given the compromise on screen size, but sometimes a tablet experience, even on a screen as small as 5 inches, can help add a bit more productivity. 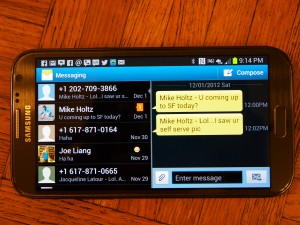 Multi-pane view in messaging app allows users to see the message list and also the message preview without having to jump between two different screens, like on a traditional smartphone.

For instance, on the email and messaging apps, Samsung had created a two-column view when you flip the phone into landscape mode. That works well and I can triage unread messages and emails rather quickly without having to hit the back button after I go into the email to get back to the email list. I wish I can have the same experience, for instance, when using the Yelp app to look at nearby restaurants, or with the Kayak app when I am searching flight reservations. Another app that can benefit from this would be Beejive, IM+, or any number of instant messaging apps. A forced tablet experience on phablets would allow third-party apps to be designed in such a way that users can control how they want to experience the app.

For the most part, apps will continue to default to smartphone view, but if users on a phablet opt to, they can also force these third-party apps to display a tablet experience when needed. This would be ideal.

And while the font size may be too small still to be used fully in tablet mode all the time, having the ability to enter tablet mode at will may help make the experience better. It’s like the forced desktop view in the browser when sometimes you just need a bit more control over your web surfing experience that the mobile view, which many sites automatically detect you’re surfing from a phone, doesn’t allow.

These phablet screens are getting bigger and the resolution now beats some desktop displays so there shouldn’t be any barriers to working like you’re on a desktop in this post-PC era. 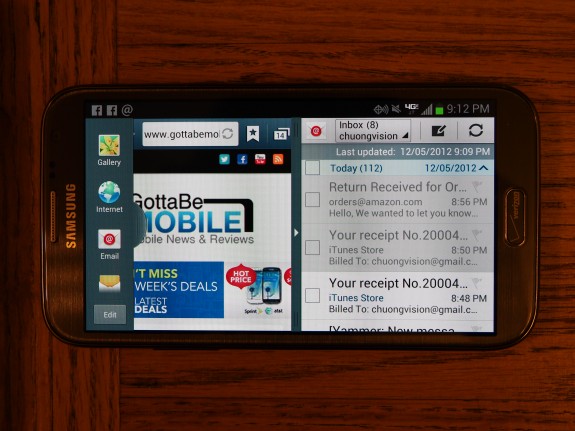 Multi-window view in landscape mode allows you to run two independent apps side by side.

And speaking of the desktop experience, another great Samsung innovation is the Multi-window screen, which allows users to run two apps side by side in either portrait or landscape orientation. This allows for true simultaneous multitasking, similar to having multiple windows opened on a desktop display, and gives you the ability to quickly juggle tasks at hand without having to switch between views. Open your email in one window and a browser in another. See a link you like, copy, head to the second window, compose an email and paste that link in that email composer. 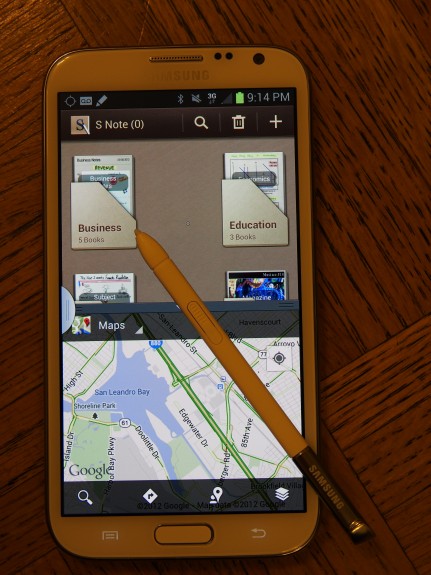 While mobile devices really ushered in an era of single-tasking, there is no excuse for that for 2013 with quad-core processing power, fast 4G connectivity, and high resolution 1080p displays in smaller form factors. Google should really innovate given the rising popularity of the phablet and help device-makers create an experience that is flexible as a tablet and as a phablet. 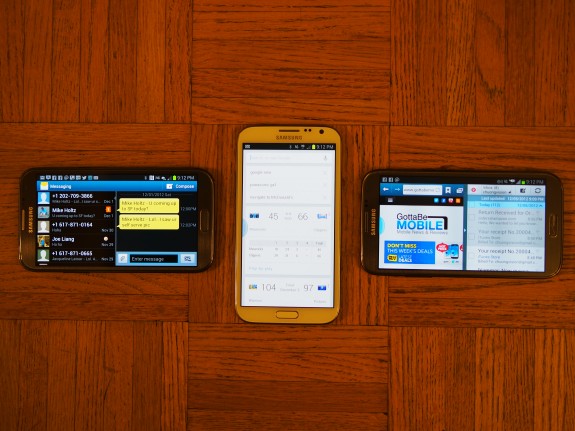 Android’s phablet support needs to make multi-pane and multi-window views native to the OS. Google needs to adopt some of Samsung’s innovations in this space.

The phablet space will only get more crowded. In addition to Samsung, LG is working on its Optimus Vu II, HTC’s just released the Droid DNA on Verizon, and Huawei is saying it will introduce a new model in early 2013.

And let’s not forget the original device that made the phablet possible: the 5-inch Dell Streak, a device that was released with a paltry WVGA display over a 5-inch panel.