At the Adobe MAX conference in Los Angeles, California, which coincidentally or ironically is happening the same week that Apple’s slated for its iPhone announcement, Adobe and Samsung are showing off Photoshop Touch, a more feature-rich Photoshop experience on a tablet, on a prototype Samsung slate. The slate that’s being used to showcase Photoshop Touch runs Android Honeycomb, it appears, and highlights a pressure-sensitive and pen-enabled touchscreen that will make it easy for users to draw and edit on the tablet. 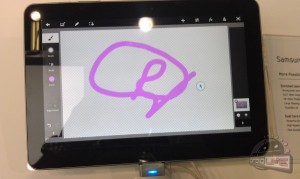 Photoshop Touch will debut in November 2011 for Android tablets at $9.99, and will allow users to edit and manipulate photos easily while on the go. An iOS version of the app will be announced in early 2012. Adobe Photoshop Touch was created using Adobe Air. Adobe says that tablets are now reaching the computing power of computers just 5 years ago, and we can hopefully see more professional apps–like Photoshop–being ported to the mobile experience down the road.

According to Adobe, plug-ins for Photoshop will not be available at this time, but the company may be exploring the idea for the future for creative professionals who need for tools.

It’s unclear if the pressure-sensitive pen technology that’s being demoed on the Samsung tablet as part of the Photoshop Touch demo would apply to other tablets. For example, HTC currently offers the HTC Jetstream, the HTC Flyer, and the HTC EVO View 4G tablets with HTC Scribe and the HTC Magic Pen that can register hundreds of pen input pressure points. According to Droid-Life, the Samsung tablet may not make it into production and is being used as a proof-of-concept device at this time:

It was built specifically for their new pen technology that is pressure sensitive and allows you to draw, erase and choose colors in a jiff.  In fact, we aren’t sure this model will ever make it to stores, but the idea of this type of pen experience on a tablet is intriguing.

As to the Photoshop Touch app itself, here’s what Droid-Life has to say about Adobe’s touch-enabled program for Android in their brief hands-on time with it:

As a piece of software that won’t be here for another month, it was very polished, easy to navigate, and powerful.  While I am by no means a PS pro, I saw every tool, brush, and setting that gets me through my day.

We’re going to have to see if Samsung came up with their own proprietary solution or if the company had utilized a digitizer technology from Wacom or N-Trig, akin to what HTC and Lenovo are doing. Samsung’s been rumored to debut a Galaxy Tab with a pen for some time now.

“With Adobe imaging magic coming to tablet devices, new apps like Photoshop Touch will open your mind about the potential of the touch interface for creativity and demonstrate that tablets are an essential part of anyone’s creative arsenal.”

“Adobe Touch Apps deliver high-impact creative expression to anyone who has a tablet,” said Kevin Lynch, chief technology officer, Adobe. “With Adobe imaging magic coming to tablet devices, new apps like Photoshop Touch will open your mind about the potential of the touch interface for creativity and demonstrate that tablets are an essential part of anyone’s creative arsenal.”

Anticipating the way people are integrating tablets into their everyday lives, the new family of Adobe Touch Apps empowers users to create on tablet devices (see below for supported devices) freeing them from the desktop or laptop computer. The new Adobe Touch Apps include:

Adobe Touch Apps build on the launch of Adobe Carousel, the only photography solution that gives access to your entire photo library across your tablets, smartphones and desktops — no storage issues, no manual syncing hassles. Enjoy all your photos anywhere you are, and make them look terrific using the same powerful photo-processing technology as Adobe Photoshop Lightroom® software.

Adobe Touch Apps will be available for Android devices in November 2011. Adobe expects to make an announcement regarding iOS availability in early 2012. Adobe Ideas is already available for the iPad. Introductory pricing is US$9.99 for each app. Access to the file viewing, sharing and transfer functionality of Adobe Creative Cloud is included in the price of each Adobe Touch App. Details regarding pricing of the Adobe Creative Cloud and its expanded capabilities around applications, services and community will be announced in November 2011.

Adobe is changing the world through digital experiences. For more information, visit www.adobe.com.