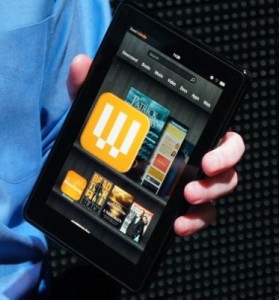 We’re seeing (and reporting) that Amazon is loading up the Kindle Fire with Apps prior to its launch next week. Facebook, Netflix, Hulu+, ESPN, and I’m sure there will be more. Certainly Amazon is looking to add value and hopes its customers feel the same way. I mean how long have we been saying that Apps are what makes a Tablet?

But on a flashback level, I find this somewhat curious. It hasn’t been too long ago that we constantly ranted about new laptops or desktops that came with a bunch of application icons neatly arrayed on our screen once we first booted up. Of course that was before applications became Apps. Those applications were for everything from AOL to Microsoft Office trials, to Malware preventers, to, well, you surely can remember those applications that some of us called CRAPWARE back in the day.

These were viewed as value add back then as well. And I’m sure some customers did derive value from them, just like the computer makers and the application owners derived value from being place on that expensive home screen real estate. Remember when some computer manufacturers turned this on its ear by offering to sell you a computer without CRAPWARE for a small fee?

So, has our thinking changed? Have Tablets with their App-centric focus changed how we view pre-installed Apps?  Are we going to see this continue among Tablet makers to a point that users demand that it stop? Or will we beg for more? Already we’ve got complaints about smart phones that carry Apps from carriers that we can’t delete. And Google has announced that Ice Cream Sandwich is supposed to help us cure carrier bloat. Does our thinking depend on the App? I think it is a safe bet that many will load up Facebook and Netflix on the Kindle Fire, so is there really a value add there for the user?

Or is this just a case of one person’s App being another person’s CRAPWARE?