For a limited time, Amazon is offering a $25 Appstore credit with the purchase of an Android device on Verizon. 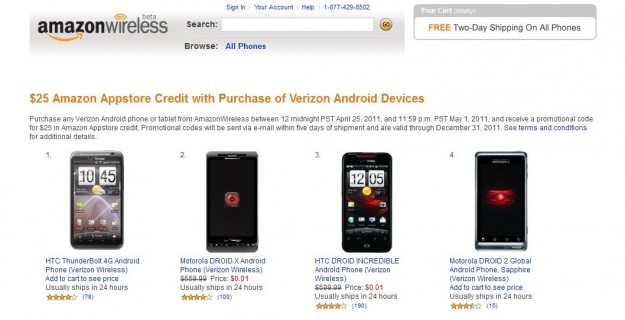 The deal started today and lasts through May 1st and is a pretty awesome deal for those that are looking to snag an Android device from Big Red. If you want to get the best offer possible, you probably want to snag the HTC ThunderBolt which is on sale for $130, an offer that only lasts until midnight tonight.

If you were too slow, you’ll have to settle for phones like the Motorola Droid X, HTC Droid Incredible 2 or the Motorola Droid 2 Global. It’s unclear whether the upcoming Samsung Droid Charge, which arrives on April 28th, will be included in the offer.

As for tablets, the Motorola Xoom is included in the offer as is the Verizon version of the Samsung Galaxy Tab.

For those curious as to what Amazon offers on their Appstore, well, then you probably want to check it out and you can do so if you head here.