In November of last year, Google rolled out its latest Android update, Android 4.2 Jelly Bean, which replaced Android 4.1 Jelly Bean as the company’s most current version of mobile software. Android 4.2, despite being a different version of Android, wasn’t a massive upgrade though, not like Android 4.1 had been from Android 4.0 Ice Cream Sandwich.

Almost immediately, the Samsung Galaxy Nexus GSM and Nexus 7 were updated with the new software, a piece of software that promised several new and intriguing features. However, as expected, owners of Nexus devices on specific carriers, were in for a much longer wait for the new features of Android 4.2 Jelly Bean.

Finally last week, several weeks after Sprint owners got their upgrade, Verizon approved Android 4.2 Jelly Bean for the Samsung Galaxy Nexus and started rolling the update out to owners in phases.

After several days of waiting, I finally got the upgrade on my Verizon Galaxy Nexus. And after spending a few days using the software, it’s time to take a close look at how Android 4.2 Jelly Bean is performing on my Samsung Galaxy Nexus.

Updating Android 4.2 Was Quick and Painless

While the wait for the Android 4.2 Jelly Bean update for the Verizon Galaxy Nexus spanned the course of many months, and included a multi-day wait from announcement to roll out, the actual process of updating to the new software was quick and painless. 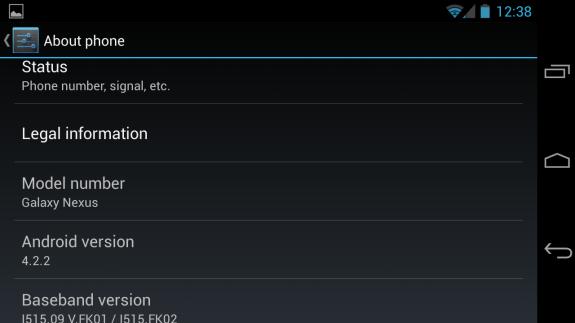 As I typically do, I waited for Verizon’s OTA to roll out instead of updating to the software manually, and because of that, I didn’t even notice that the update had downloaded in the background until a few hours it had done so. The update prompted me to install the software, a process that it said would take around five to seven minutes.

It did not lie. Android 4.2 Jelly Bean, despite being a new update for Android, is not a big piece of software, checking in at a little over 80MB in size. It did take only five to seven minutes before the update installed itself, rebooted, and brought my Verizon Galaxy Nexus up to speed with the rest of the Nexus devices out there.

I’ve had Android 4.2 Jelly Bean installed on my Verizon Galaxy Nexus for a couple of days now. And while the original Nexus 7 Android 4.2 update had been a bit shoddy, containing a number of issues, the Verizon version of the update looks like a typical Verizon Android update, free from major bugs and offering high quality performance.

Android 4.2 keeps the fluidity that Android 4.1 brought to the Galaxy Nexus as the user interface is still extremely crisp and fast. Scrolling through my various home screens remains fast and opening and closing applications is as crisp as it ever has been. 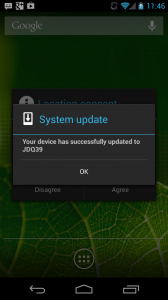 So far, Android 4.2 seems void of any major issues.

So far, Wi-Fi connectivity is extremely strong. I haven’t heard about any complaints with Wi-Fi connectivity as far as the Verizon Galaxy Nexus or any other Nexus for that matter is concerned but it’s nice to know that Samsung, Google and Verizon did not break the connectivity that I, and many others, depend on when it comes to using the phone at home.

One of the issues that Samsung Galaxy Nexus owners have had in the past are issues with Bluetooth. So far, so good with my Galaxy Nexus as the phone has been able to keep a solid connection when paired with my Bluetooth speakers.

Bugs? If So, Hard to Find

Thus far, I’ve been unable to find any major bugs with Android 4.2. The calendar issue that arrived and was fixed in Android 4.1.1 obviously isn’t there, my Galaxy Nexus charges fine – my Nexus 7 still charges extremely slowly on Android 4.2.2 – and I haven’t experienced any random reboots since installing the software.

I’ve heard from a few people who have experienced reboots though they don’t seem to be widespread and my Galaxy Nexus has, so far, managed to avoid the issue.

I’ve never had much success with the battery life on my Samsung Galaxy Nexus. In fact, it has been one of my biggest complaints about Verizon’s Nexus smartphone, especially now that I have an IPhone 5 and have used phones like the Motorola Droid RAZR MAXX HD. It’s just simply not good enough for a flagship smartphone.

Android 4.2 Jelly Bean doesn’t improve on the Galaxy Nexus’ poor battery life in any way, but it also doesn’t impact it in a bad way either. Battery life seems to be as normal as it was before updating to the new software. That means far less than all day battery life and much less than the near seven hours of 4G LTE browsing that I get from my iPhone 5. 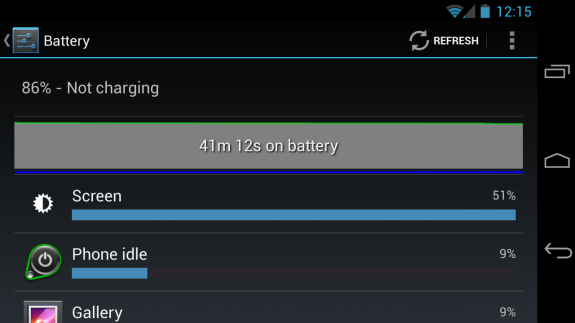 Galaxy Nexus battery life still leaves something to be desired.

As you can see, my Galaxy Nexus drained 13% in about 40 minutes with extremely light usage over Wi-Fi. That’s about par for the course with this smartphone.

Android 4.2 Jelly Bean also comes with a number of new features, some of which I really like and some which I am not so keen on. Here is a look at a few of the biggest features that came with Android 4.2.

One of the Android 4.2 Jelly Bean features that didn’t come with my Nexus 7 is called Photo Sphere, a camera feature found in the Camera app that allows Galaxy Nexus owners to take 360-degree panoramic photos. I was pretty excited about the prospects of Photo Sphere but thus far, my experience has been mixed. 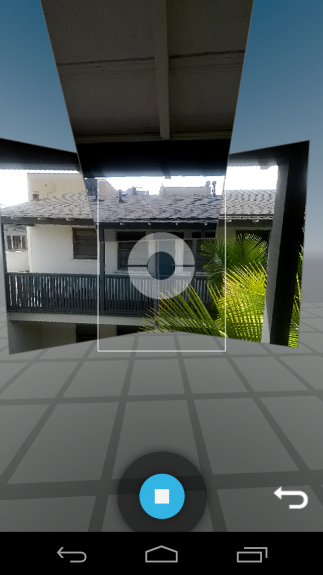 Photo Sphere isn’t too tricky to find its one of the options in the bottom left corner of the stock Camera app. Once opening it, it will bring you to a screen that makes you align your photo with the middle of the circle. Once there, you’ll need to essentially connect the dots to form your panoramic photo.

It’s little tricky to get the photo exactly how you want it to look and most of my photos have ended up looking like this shot from CES wherein it’s not a seamless photo.

I think after some practice, I’ll be able to get it down, but thus far, the quality of photos, even my best ones, make it seem like it won’t be a feature that I use on a regular basis.

This was one of my favorite features on my Nexus 7. Quick Settings is a menu that can be found by dragging down the Notification Bar. In the upper right corner, there is an icon to click that will bring owners to a screen where all the essential Settings of the Galaxy Nexus can be toggled. 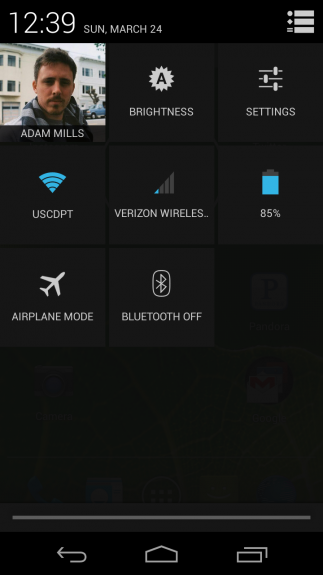 For instance, Airplane Mode can be switched on and off with ease, Wi-Fi can be adjusted with a long press shutting it off completely, clicking on the Verizon Wireless icon brings you to a menu that displays mobile data usage – fantastic for those that are on tiered data, and Bluetooth can be turned on or off as well.

This may seem like a little feature but it’s probably the Android 4.2 Jelly Bean feature that I use the most.

I’ve never been a big fan of gesture keyboards. I never got into Swiftkey or Swype or any of the keyboards that allow you to swipe around to complete words and sentences for things like text messages and emails. So the gestures that Google added to the keyboard in Android 4.2 weren’t too exciting to me. They still aren’t.

That said, they function as advertised and the few texts and emails that I’ve used using gestures have been sent out accurately and efficiently. I probably won’t use it on a regular basis but at least I know it’s there if I need it.

The update also brought new Lock Screen Widgets to the table for Galaxy Nexus owners. This means that users can add widgets like Email, Google+, Calendar and more to the lock screen to get a preview before opening up the real deal inside the phone.

For me, they’re extremely useful. I can peek at the highlights of Google+ without having to open my phone or even take a look at text messages and all it takes is a simple swipe to the left or right to do so. 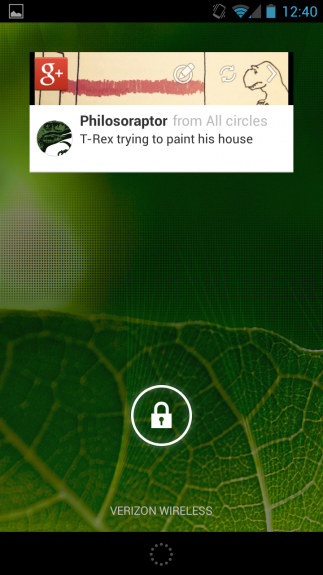 Lock screen widgets are a quick way to see information.

I’m hoping that Google adds more functionality with Android 5.0 as there is a bit of promise here but so far, these have been extremely useful to me and function quite well.

As I’ve said, while Google and Verizon might be hyping up the Daydream screen saver as a big feature in Android 4.2, I find it to be incredible useless. Others, especially those who have shot gorgeous photos on their Galaxy Nexus may feel different, but I still haven’t found the need to use it

Should You Upgrade to Android 4.2?

Verizon is known for extensively testing their Android updates before releasing them and that generally means that they are bug free. So far, Android 4.2 for the Verizon Galaxy Nexus seems to be without any major bugs. It also keeps the battery life the same while adding new features that should help to enhance the experience.

That said, it’s at this point safe to install the Android 4.2 Jelly Bean update on the Galaxy Nexus and start using its features. Those that haven’t received the update should see it arrive soon.

What’s Next for the Verizon Galaxy Nexus?

The last update that the Verizon Galaxy Nexus received, prior to Android 4.2, was Android 4.1. It got nothing in between. This means that if the Galaxy Nexus does get another update from Verizon, and there is no confirmation that it will, it will more than likely be Android 5.0 Key Lime Pie, which is rumored for a May debut at Google I/O.

Android 5.0 Key Lime Pie could arrive in May.

The Galaxy Nexus is approaching its two year anniversary which means that there is a chance that Verizon could leave Android 5.0 Key Lime Pie off the menu, but if I had to guess, I’d imagine that the Galaxy Nexus will get the update at some point down the road.

Just don’t expect it to arrive soon after Google makes the announcement.